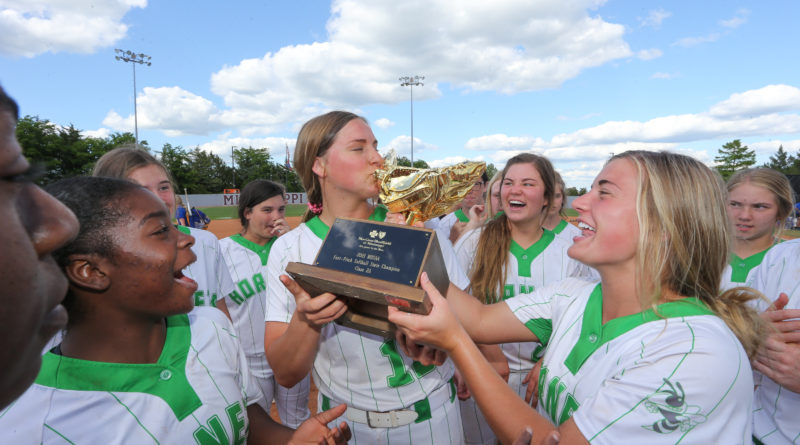 STARKVILLE —The Lake Lady Hornets knew all the pressure was on Mantachie in Game Two of the 2A State Championship Series, and that allowed them to play loose and fast.

The Lady Hornets erased an early 1-0 deficit, put up a five-spot in the third inning and hung on to beat Mantachie 6-3 to claim the 2021 MHSAA 2A Fast-Pitch Softball Championship Thursday afternoon at Nusz Park.

“I’m proud of our girls and how hard they worked to win this championship,” Lake coach Jake Loper said. “We still made too many errors, and that’s what’s sticking in my mind right now, but we did what we needed to do to win the game.”

Taylor Duncan was the big hero Thursday. The senior came on in relief after Mantachie cut the Lake lead to 5-3 in the bottom of the fourth inning and retired 10 of the final 14 Lady Mustangs — all strikeouts — and gave up just one hit and one walk.

“I think we had nerves going out there, even though we played here yesterday,” Duncan said. “But we settled down, especially after we started hitting the ball.”

The big inning came in the third after Gracie McKee got things going with a leadoff walk. Game One hero Laneisha Palm drove her in with an infield single to plate one run, and an error on a bunt off the bat of Kate Gladney scored another.

Abbie McGee’s RBI single brought in another run to stretch the lead to 3-1, and Josie Gibbs drove in two more with a clutch, two-out double to center field.

Gibbs drove in the Lady Hornets’ other run in the fifth on a sacrifice fly to right that allowed McGee to score from third.

Kate Gladney drew the start for Lake. She lasted 3.1 innings and gave up three runs on four hits with two strikeouts.

“Kate pitched well for us,” Loper said. “But it was nice to be able to go to Duncan there in the fourth, because she throws hard and I’m sure it looked like it was coming in at about 100 miles per hour.”

The loss was bittersweet for Mantachie (23-8), which surprised a lot of softball fans around the state by storming through 2A South despite starting five players who were freshmen or younger.

Ramsey Montgomery was the hard-luck loser. She allowed seven hits in six innings with two walks and three strikeouts. Only one of the six runs Lake scored were earned.

Lynsey Barber led the Lady Mustangs at the plate. She finished a homer short of the cycle and drove in a run.

“I told the girls they didn’t have anything to prove to anyone,” Mantachie coach Kristi Montgomery said. “We made it here with a basically a junior varsity squad, and we didn’t get the timely hits we needed. But hey, we were district champs and South State Champs, so I think we’ll be able to look back on what we accomplished and be proud.”