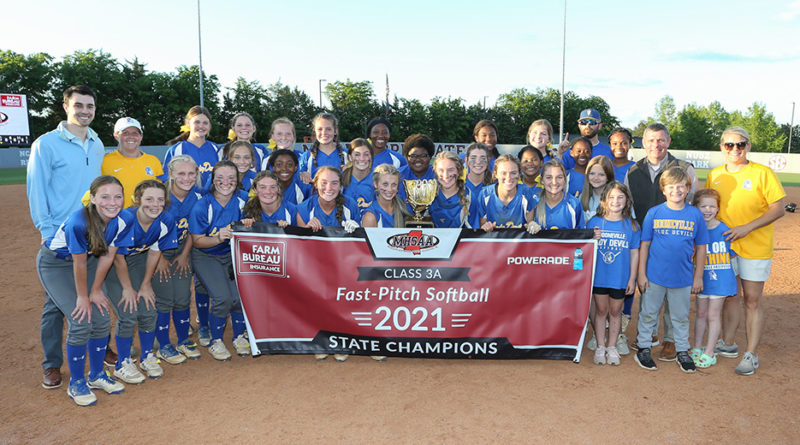 But that just made Thursday’s 6-1 win over Raleigh to clinch the 2021 MHSAA 3A Championship all the sweeter.

“These kids have worked so hard since last year when they got their season cut short,” Booneville coach Jessica Taylors said. “From day one they’ve been grinding every single day. This was our ultimate goal and to come here and win is indescribable. It makes everything we’ve done and all the work we’ve put in worth it.”

The Lady Blue Devils (30-4) jumped all over the Raleigh starter Holly Craft, who held this same Booneville lineup to two hits in Wednesday’s Game One.

Janet Thompson and Hallie Burns both singled in the top of the first, and eighth-grader Olivia Garrett turned on the third pitch she saw and launched it over the left-center wall.

“I got two rise balls, which is what she struck me out on twice yesterday,” Garrett said. “So I had to lay off of those, but the third pitch was an inside fastball, and as soon as I saw it, I knew it was the one.”

Garrett’s blast gave Booneville a lead it never relinquished, but she and Burns weren’t done. They added back-to-back RBI doubles in the sixth inning, and Hannah Davis got in on the act with an RBI single to give Booneville six runs.

Garrett went 3-for-4 at the plate with four RBIs and Burns was 2-for-4. Both of them scored twice.

Raleigh’s lone run came in the bottom of the seventh when Holly Craft singled to left to score Hayley Revette. It was the first run against Burns in 14 innings of work in the series, and it was unearned.

After holding Raleigh to one hit Wednesday, Burns — just a sophomore — held the Lady Lions to six hits and issued one walk with seven strikeouts Thursday.

“She’s an amazing young woman who is obviously incredibly talented,” Taylor said. “She’s a 10th grader, but she is a great leader on this team. She treats everyone the same — from the managers to the seniors on the team — she doesn’t think she’s better than anyone else, and she treats them that way.”

The stat sheet might have looked better for Raleigh in Game Two than it did in Game One, but none of those six hits seemed to come at the right time.

Then Lady Lions (21-8) stranded nine runners, including six in scoring position. The most disappointing inning was the second, when Raleigh loaded the bases with nobody out and Burns got three strikeouts to get out of the jam.

“We just couldn’t get those hits when we needed them most, and that was the story of the series,” Raleigh coach Kassidy White said. “We stranded eight or nine runners tonight, and that hurts. We’re a young team and we’ll have a chance to get back here, but I wanted it for these seniors.”

White is right. In fact, both of these two teams have a ton of returning talent. Craft and the Revette twins — Kayley and Hayley — will both graduate from Raleigh later this month, but the other 17 are underclassmen.

And Booneville is right there with them. The Lady Blue Devils will graduate six players, but return the core of the lineup, including Burns and Garrett.

“We’re going to miss these seniors,” Taylor said. “They have worked so hard for four years to get this reward. But we’ve got a good young group of players and I’m sure you’ll see us back here next year. We like this feeling too much.”