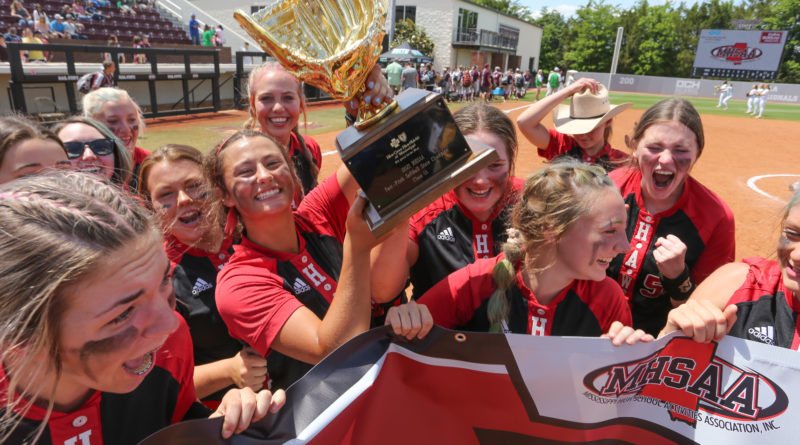 STARKVILLE — Just looking at the headgear in the Myrtle softball team dugout during a game, it’s easy to see why they enjoy the game.

There’s a rainbow wig, a cowboy hat and a tiara. Even coach Brooke Gordon described her team’s playing style as “chaotic.” Everyone’s hair is chalked green and purple, and the celebrations after every out make it hard to take the them seriously.

But that would be your first mistake.

These fun-loving Myrtle Lady Hawks may have been dressed like it was Halloween, but they were all business in capturing the program’s first fast-pitch state championship with a 7-1 win over Stringer Thursday afternoon at Nusz Park on the campus of Mississippi State University.

“We like to keep it light and fun,” Myrtle’s do-it-all starting pitcher Caylie Streich said. “You strike out, and you turn around and see all these faces painted and crazy hair and hats. That’s how we pick each other up.”

On Thursday, they picked each other up on the field, too.

Streich was the big hero — after pitching a complete game and knocking in a run to get the win in Game One, she went the distance in the circle again and drove in three more runs in Game Two to clinch.

She gave up a run on six hits and two walks with six strikeouts, battling through nagging pain in her hip to help bring home the championship.

“She has had that nagging pain and then she twisted her ankle about a week ago,” Myrtle coach Brooke Gordon said. “I was a little worried about her coming into the series, and I think it might have affected her speed a little bit, but she was still spinning the ball.”

Myrtle (28-4) got on the board in the top of the second on a sacrifice fly from Streich and a Breanna Smith RBI groundout to take an early 2-0 lead.

Stringer responded in the bottom of the inning with back-to-back doubles from Jaycee Holifield and Hannah Buckley to plate a run and cut the Myrtle lead to 2-1.

The Lady Hawks picked up another run in the fifth after Streich drew a bases-loaded walk.

The final four runs all came in the top of the seventh. Streich laid down a bunt that brought home one run, Breanna Smith laced an RBI single and Keragen McCullough drove in two with a double to left-center.

Streich gave up a couple of singles in the bottom of the inning, but got a groundout back to the circle to end the game and send the large Myrtle crowd into celebration mode.

Smith went 2-for-4 at the plate with an RBI and Keragen McCullough went 3-for-4, including the 2-RBI double in the seventh.

As sweet as the win was for Myrtle, the loss stung just as bad for Stringer (27-5). The Lady Red Devils put six hits on the board in Wednesday’s Game One and six more in Thursday’s Game Two, but the big hit to break a game open eluded them in both games.

“We’ve got a pretty young team, but I don’t think the moment was too big for them,” Stringer coach Jody Rowell said. “They are hurting right now, but we’ll look back on this as a learning experience and I’m sure it’ll make our underclassmen hungry to get back here.”