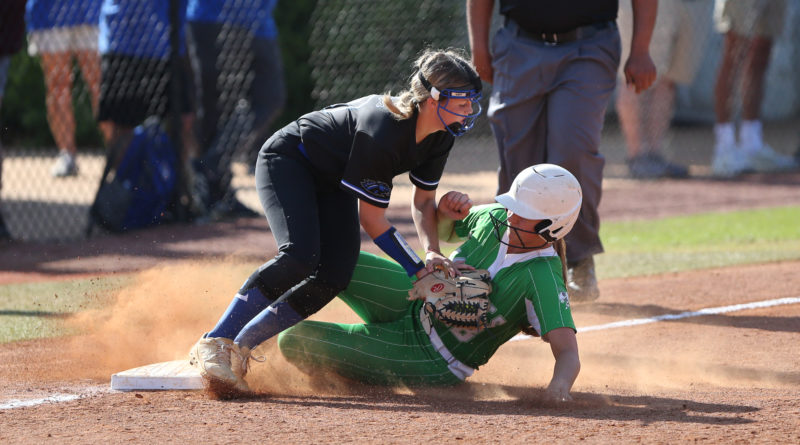 STARKVILLE — Laneisha Palm has been solid for Lake all season. In Wednesday’s 2A Championship Series-opening 12-4 win over Mantachie, she was exceptional.

The sophomore went 3-for-3 at the plate with an inside-the-park home run and four RBIs to lead the Lady Hornets past the Lady Mustangs at Nusz Park on the campus of Mississippi State University.

The win gave Lake the 1-0 lead in this 2A Championship series, which is scheduled to continue Thursday following the conclusion of the 1A game at 1:30 p.m.

Wednesday, the Hornets (29-7) jumped all over Mantachie’s sure-fire all-state pitcher Ramsey Montgomery right from the start.

Lake took a 2-0 lead in the first inning, when Laurel Breland laced a one-out single through the left side to bring home Tra’shaylah Wilson and Gracie McKee drew a bases-loaded walk.

Mantachie (23-7) got one run back in the bottom of the first on a throwing error that allowed Lynsey Barber to score from all the way at second base.

Lake picked up another run in the second after a second Mantachie fielding error. This time, Laneisha Palm singled and advanced to third on a throwing error, then came home on Taylor Duncan’s sacrifice fly.

They put up three more runs in the third after Palm singled to bring home Gracie McKee and Katlyn Lott.

The rout was on from there. Lake pounded out 15 hits and took advantage of three Lady Mustang fielding errors. Taylor Duncan went 2-for-4 with a double and three RBIs and Abbie McGee finished with three hits — including one double — and drove in three runs.

“We wanted to stay ahead in the count and keep (Montgomery) uncomfortable and make her throw pitches to spots she didn’t want to throw pitches to,” Hornets coach Jake Loper said. “They hit the ball well too, but luckily most of them went right at one of our defenders. Tomorrow, the score could be completely reversed without anything on the field changing.”

Lynsey Barber led the way for Mantachie with three hits, while Campbell Guin went 2-for-2 with a double and a walk and drove in a pair of runs.

“We didn’t play very well defensively,” Mantachie coach Kristi Montgomery said. “The game just kind of got away from us defensively. We hadn’t faced a team that can bunt the way they can and hide it so well. They put a lot of pressure on us with that, and we didn’t respond well. But we live to fight another day, and we’ll be back tomorrow ready to play.”