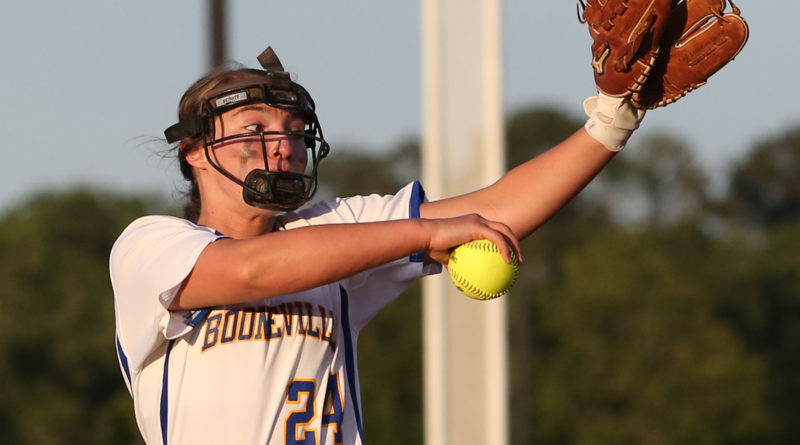 STARKVILLE — A lot of folks might struggle in a big-game environment in front of a lot of fans. Booneville’s Hallie Burns thrived on it.

In the biggest start of her young career, the sophomore pitched a complete-game, one-hitter to help the Lady Blue Devils get past Raleigh 1-0 in the MHSAA 3A Fast-Pitch Softball Championship series opener at Nusz Park in Starkville Wednesday night.

Burns was fantastic. She threw 66 of her 81 pitches for a strike, walked one hitter and allowed one hit with 14 strikeouts. She struck out every hitter in the Raleigh lineup at least once.

“I’m used to travel ball so I’ve played in a situation like this, but I don’t know how anyone could not be pumped playing in front of this crowd,” Burns said. “Our community came out and supported us, and they’ll keep you up even if you should be down.”

With the win, Booneville (29-4) took a 1-0 lead in the best-of-three championship series, which resumes tomorrow 30 minutes after the conclusion of Game Two in the 2A series.

Burns’ win was a masterpiece, but only slightly better than the performance from Raleigh starter Holly Craft, who went six innings and gave up one run on two hits and two walks.

The Lady Blue Devils scratched across one run in the bottom of the first, when Caroline Thompson reached on a hit-by-pitch and came around to score on a two-out single up the middle off the bat of Hannah Davis.

It wasn’t flashy, but it proved to be enough.

“We aren’t a team that is going to go up there and hit a bunch of home runs,” Booneville coach Jessica Taylor said. “But I know how good our defense has been and how consistent our pitching has been, and I knew we would be tough to beat if we could score one or two runs.”

Raleigh only had one player advance past first base the entire game. Makayla Blakeney broke up Burns’ no-hitter with a single to lead off the bottom of the seventh inning and stole second base with two outs. But Burns struck out Lions’ cleanup hitter Hayley Revette to end the game.

“I knew the second batter was fast and she was going to bunt,” Burns said. “So I just tried to keep it up in the zone so she would pop it up. But with how solid the defense was playing behind me, I wasn’t worried about (the runner).”