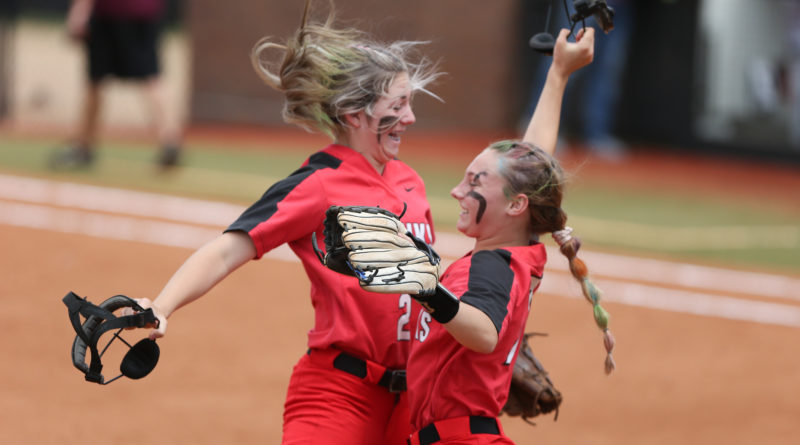 STARKVILLE — The morale was low in the Myrtle dugout after the Lady Hawks blew a 3-0 lead in the top of the seventh inning Wednesday afternoon at Nusz Park in the MHSAA 1A Fast-Pitch Softball Championship series opener.

All that faded away when freshman Emma Mayer stepped to the plate and blasted a two-run homer to left to give Myrtle the 5-4 win.

“I knew I had to pick up my teammates and make something happen,” Mayer said. “I needed to do something for our pitcher, who had worked so hard to get us in that position.”

The walk-off homer gave Myrtle a 1-0 lead in this best-of-three series, which continues at 1:30 p.m. Thursday.

They put two runs on the board in the first inning when Kinsley Gordon laced an RBI triple into the left-center gap to score Sarah Kate Thompson, then came home on a wild pitch.

The Lady Hawks put up another run in the fifth on a sacrifice fly from Gordon that brought Jessica Pickens home.

South State Champion Stringer (27-4) came alive in the top of the seventh after loading the bases with nobody out. Allie Goldman came home on a fielding error, and Janiya Agee drove in two runs with a single down the right field line.

That tied the game at 3-3, and Stringer starting pitcher Madilyn Graham brought home the go-ahead run with a sacrifice fly to center field.

Graham got one quick out in the bottom of the inning, but Thompson laced a one-out single to bring Mayer to the plate. She delivered on the second pitch, launching the home run half-way up the trees outside the stadium and sending the Myrtle faithful into a frenzy.

Her game-winning stroke gave Myrtle the win, despite the Lady Hawks committing a season-high six fielding errors. None of Stringer’s four runs were earned.

“We had basically fallen apart there in the top of the inning,” Myrtle coach Brooke Gordon said. “I know we haven’t had another game with six errors, but I thought if we could get Kinsley (Gordon) to the plate with the tying run on board, we could at least tie it. Then Emma just smashed it.”