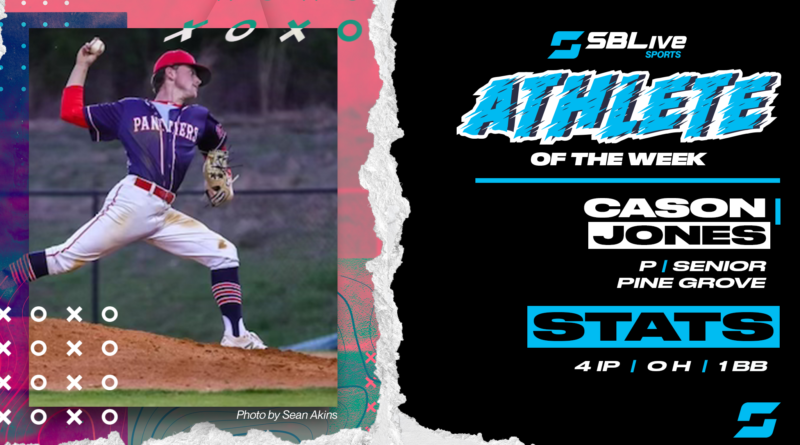 Congratulations to Pine Grove senior Cason Jones for being voted SBLive’s Mississippi High School Baseball Player of the Week for April 26-May 2!

The senior pitched all four-innings of the Panthers’ 14-0, series-clinching win over Houlka in the first round of the 1A North Playoffs. Jones only allowed one base-runner, via a walk.

Jones received 52.65% of the vote, beating out Wayne County’s Connor Pittman who finished second with 42.27%. Richton’s Garrett Brewer finished third with 4.53% and Tupelo’s Hunter Elliott finished fourth with 0.16%. There were over 36,000 votes tallied this week!

Here are the other athletes who were nominated for April 26-May 2:

Collin Clark, Center Hill: Pitched seven innings to pick up a 3-2 win over Vicksburg in the opening round of the 5A North Playoffs. He gave up just one earned run on four hits and a walk with seven strikeouts.

Garrett Brewer, Richton: Went 3-for-6 at the plate with two home runs, driving in six runs and scoring three more himself in a series-clinching 11-0 win over Nanih Waiya to advance to the second round of the 1A South Playoffs.

Hunter Elliott, Tupelo: Went 2-for-4 at the plate, including a triple and a home run, to drive in five runs in a 13-1 playoff-opening win over Warren Central in the 6A North Playoffs. He also pitched five innings without giving up a single hit.

Cam Finn, Pascagoula: Went 2-for-4 with three RBIs in a 6-1 win over South Jones in the opening round of the 5A South Playoffs.

Seth McCartney, Brandon: Pitched a complete game to help the Bulldogs to a 3-1 win over Ocean Springs in the first game of the opening-round series against Ocean Springs. He gave up just one earned on two hits and a walk, striking out nine Greyhound batters.

Connor Pittman, Wayne County: Pitched a complete-game shutout to even the opening-round series against Brookhaven in the 5A South Playoffs. He gave up three hits, walked two and struck out 12 batters.

Waylon Sebren, Puckett: Pitched all five innings of the Wolves’ 11-0 win over Perry Central in the opening round of the 2A South Playoffs. He struck out 12 batters (out of 15 total outs) and gave up just two hits.

Hayze West, Newton County: Tossed a complete-game shutout to pick up the win in the first-round series opener against St. Stanislaus in the 4A South Playoffs. West allowed just two hits, issued three walks and struck out eight batters.