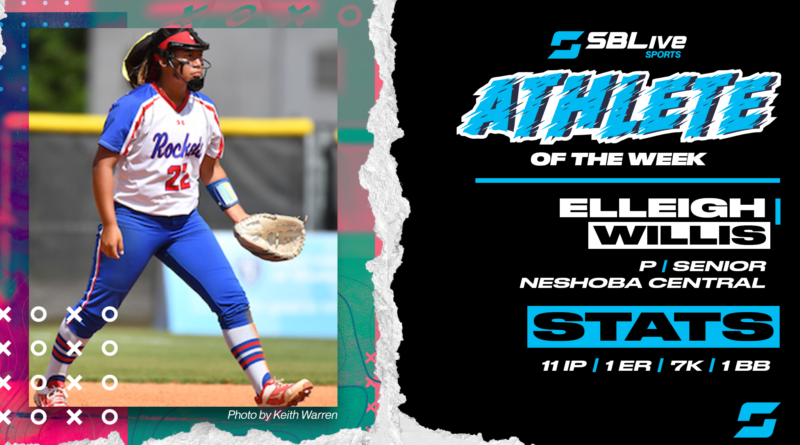 Congratulations to Neshoba Central senior Elleigh Willis for being voted SBLive’s Mississippi High School Softball Player of the Week for April 26-May 2!

The senior pitched in both games of the Lady Rockets series sweep over Grenada in the third round of the 5A North Playoffs. She pitched a total of 11 innings, giving up one run on eight hits with seven strikeouts and just one walk.

Willis ran away with this week’s honor, receiving 70.27% of the total vote.

Here are the other athletes who were nominated for April 26-May 2:

Bailey Bishop, Oak Grove: Went 7-for-14 at the plate with two doubles, a triple, four RBIs and four runs scored to help the Lady Warriors take two of three from Northwest Rankin in the third round of the 6A South Playoffs. Her second double of the series drove in the winning run in the seventh inning of game three.

Cara Biswell, Brandon: Served up a gem to help the Lady Bulldogs get past Petal 4-0 in the opening round of the 6A South Playoffs, pitching all seven innings and allowing just two hits and two walks, with 10 strikeouts.

Breelyn Cain, West Lauderdale: Pitched all 21 innings of the Lady Knights’ 3-game series win over Mooreville. She gave up just two runs on 12 hits with 20 strikeouts and four walks.

Maddie Mask, Kossuth: Pitched an eight-inning, complete-game shutout in a 1-0 win to seal the 3A North third-round matchup against Houston. Mask used just 87 pitches to record 24 outs, giving up five hits and one walk and striking out six batters.

Ramsey Montgomery, Mantachie: Went 6-for-8 at the plate with two doubles, four RBIs and three runs scored in a 2-game series win over Pisgah in the third round of the 2A South Playoffs. Also pitched all 12 innings of the series, allowing just one unearned run on three hits and two walks with 16 strikeouts.

Annie Orman, West Union: Went 5-for-5 with two doubles, a triple and two home runs — one a grand slam — to help the Lady Eagles get past Pine Grove in the third round of the 1A North Playoffs.

Megan Vinson, DeSoto Central: Twirled not one, but two complete-games to help the Lady Jaguars get by Germantown in the third round of the 6A North Playoffs. Vinson gave up two runs on four hits and a couple of walks in game one, and shut out the Lady Mavs on three hits and a walk in game three. She struck out 18 batters in 15.1 innings of work.