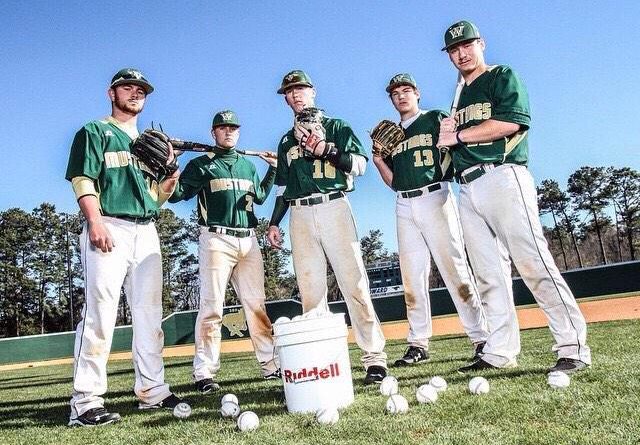 The second round of the 5A playoffs is in the books, and we’ve got some great matchups coming in the third round. Here’s a look at who is still alive, how they got here and what we’ve got on deck in the 5A South State Semifinal round.

Second-Round Recap: The Tigers faced a much tougher test in the second round than they did in the first, but they passed with flying colors.

John Long drove in two runs on three hits in a 3-1 win in the series opener Thursday night. Drake Douglas turned in a gem on the mound, allowing one earned run on four hits and four walks with four strikeouts in seven innings of work.

They cranked up the bats Friday and pounded out nine runs on eight hits and five walks in a 9-7 win in game two. Long, Evan McCarthy and Ethan Turner each tallied a couple of hits and drove in two runs.

Second-round recap: Ridgeland’s Montravious Winn hurled a complete-game no-hitter in the Titans’ 1-0 win in the series opener. He walked three batters and hit another, but struck out seven batters. Richard Mays provided the game-winning RBI single in the fifth inning.

Cleveland Central got revenge with a 7-6 win in the second game. Jaylan Jones doubled and drove in three runs as the Wolves scored a run to tie the game in the sixth, then walked it off on a Ridgeland fielding error in the bottom of the seventh.

Winn was the big hero again in Game Three, as he drew a bases-loaded walk in the bottom of the eighth inning to give Ridgeland the walk-off, 13-12 win. Richard Mays and Marquiel Thompson had three and four hits, respectively, and both of them doubled and homered.

Tyrus Williams drove in four runs with a pair of singles in a 10-3 win for Lafayette in the first game of the series. Blake Loper pitched a complete game to pick up the win, allowing two earned runs on three hits and three walks with seven strikeouts.

New Hope bounced back in dramatic fashion with a 10-9 win in nine innings in game two. Richard Guy came up with the big two-out single to drive in two runs and walk off with the win.

It took one more game than they would have liked, but the Center Hill Mustangs stampeded into the 5A North Semifinal by taking two of three from a tough Neshoba Central team.

Center Hill took the series opener 5-1 with a strong pitching performance from Collin Clark. The junior went all seven innings and allowed one earned run on five hits and three walks with three strikeouts. Blake Holmes drove in two runs and Logan Esfeld singled twice with an RBI.

Neshoba Central (22-9) got the bats going in an 8-4 win in the  second game. They plated four runs in the fourth inning to take a lead they never gave back. Jacob Killens had a heckuva day, going 3-for-4 at the plate, driving in two runs and scoring three more. Six of the Rockets’ eight runs were unearned.

But the Mustangs pulled out a 5-4 win in the series finale thanks to some timely hitting a solid pitching performance from Christo Peeks. Peeks went six innings and gave up four runs (only one earned) on five hits and didn’t issue a walk.

Center Hill broke a 2-2 tie in the fourth inning when Blake Holmes laid down a bunt to bring home Jacob Killens from third. Peeks followed a batter later with an RBI single that gave the Mustangs a 4-2 lead they never gave back.

West Jones certainly looked like a 5A South contender in it’s second-round sweep of Hattiesburg (13-11). The Mustangs plated five runs in the sixth inning of the series opener to get the 10-run rule win, 10-0.

The Mustangs worked 10 walks and pounded out seven hits in the win, highlighted by Cade Mauldin’s 3-for-4 night and Lawson Odom’s game-high two RBIs. Cole Tolbert worked all six innings on the mound and worked around one hit and two walks with 14 strikeouts.

In the second game, Hattiesburg’s starter Jermel Ford held the Mustangs at bay until the fifth inning before they broke through with four runs and held on for a 6-3 win. Clayton Widener went 3-for-4 at the plate and was one of five Mustangs to drive in a run.

Kace Matthews got the win in that one, going six innings and giving up one earned run on one hit and three walks with six strikeouts.

Pascagoula is a dark horse in 5A South after beating a good South Jones team in the first round and sweeping Natchez in the second.

The Panthers scored five runs in the first inning of Thursday’s second-round opener without recording a hit, and it was all downhill from there for the Bulldogs.

Pascagoula went on to win that first game at Natchez 18-3 in five innings. They exploded for 13 hits after that first inning, as Houston Johnson and Griffin Wells led the way with two hits and three RBIs apiece.

Pearl River Central walked it off in the series-opening 7-6 win Thursday night on a fielder’s choice (guess he made the wrong choice?). Cameron Brunson and Hunter Brunson both recorded multiple hits and an RBI apiece.

Junior Landen Droddy and freshman Jacob Johnson combined to hold Brookhaven to one run on eight hits in the 12-1 series-clinching win in game two. Jacob Stock-still drove in three runs, while Jared Dickens and Cameron Brunson each drove in two.

East Central came out guns blazin’ in a series-opening 10-1 win at home Thursday night. Hollis Porter homered and drove in four runs and Eli Smith had a two-run double. Cole Tillman dominated on the mound too, going seven innings without giving up an earned run on three hits and two walks with four strikeouts.

Gage Williams responded for Long Beach with a fantastic start in a 5-1 win in the second game. The junior gave up just one run in seven innings on seven hits and one walk with four strikeouts. Brent Garner came through at the dish with a three-run homer.

In Game Three, East Central plated three runs in the third inning and four more in the fourth en route to a 10-2 win. Hollis Porter went 2-for-2 at the plate with a home run and four RBIs and Cole Tillman kept the Long Beach hitters at bay, allowing one earned run in seven innings.