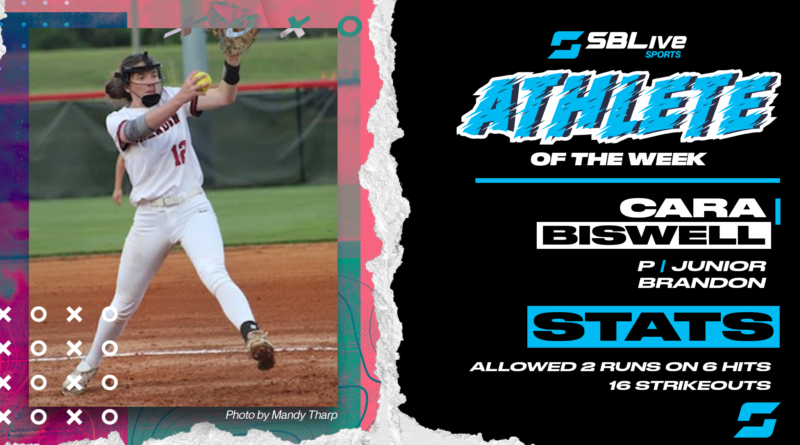 Congratulations to Brandon junior Cara Biswell for being voted SBLive’s Mississippi High School Softball Player of the Week for April 19-25!

The junior worked 10 innings in the circle over three wins for the Lady Bulldogs, allowing two runs on six hits with 16 strikeouts.

Biswell received 48.39% of the vote, beating out Northwest Rankin’s Grace Wallis, who finished with 39.98%. Puckett’s Kinley Ainsworth finished third with 7.22% and Neshoba Central’s Elleigh Willis was fourth with 3.65%. There were over 148,000 votes tallied this week!

Here are the other athletes who were nominated for April 19-25:

Brooklyn Farmer, DeSoto Central: Went 3-for-7 at the plate over two games with two triples and four RBIs.

Ryan Hornsby, Oak Grove: Worked 12.2 innings and picked up one win over North Pike, allowing seven hits and two walks and striking out 21 batters. Also went 3-for-7 at the plate with one RBI.

Grace Wallis, Northwest Rankin: Pitched a complete game shutout to pick up a playoff win over D’Iberville, allowing just two hits and a walk and striking out 11 batters.

Elleigh Willis, Neshoba Central: Pitched 13 innings over two games to pick up two wins over West Lauderdale, allowing two earned runs on 10 hits and two walks with 12 strikeouts. Also drove in a run on a couple of hits in the second game.

Avery Wolfe, Hernando: Went 3-for-6 at the plate over two games with a triple, two walks and five RBIs.