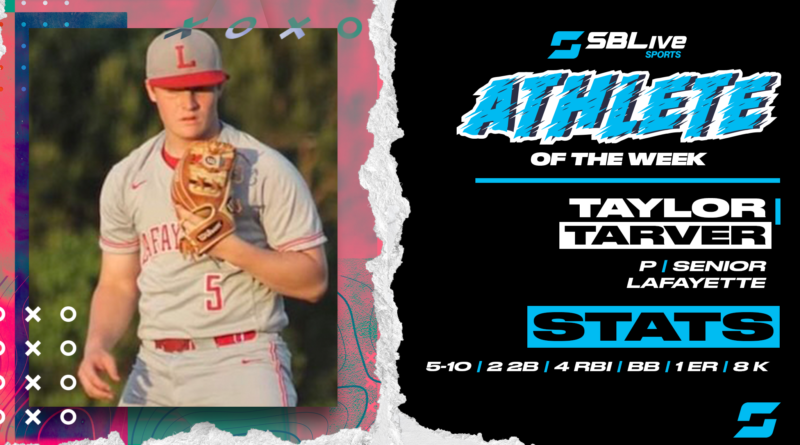 Congratulations to Lafayette senior Taylor Tarver for being voted SBLive’s Mississippi High School Baseball Player of the Week for April 12-18!

The senior went 5-for-10 at the plate with a walk, two doubles and four RBIs in a three-game sweep of Center Hill. Also pitched six innings in Game 3, giving up one earned run on one hit with eight strikeouts to pick up the win.

Tarver received 54.04% of the vote, beating out Germantown’s Bryce Fowler who finished second with 34.23%. Oxford’s Kelly Crumpton finished third with 5.05% and Saltillo’s Drake Douglas finished fourth with 3.53%. There were over 27,000 votes tallied this week!

Here are the other athletes who were nominated for April 12-18:

Kelly Crumpton, Oxford: Went 6-for-11 at the plate with two walks, a double, three home runs, nine RBIs and six runs scored in a three-game sweep of Southaven.

Drake Douglas, Saltillo: Went the distance to pick up a complete-game win in the series-opener against Lake Cormorant, throwing 113 pitches and allowing one earned run on four hits and two walks with 10 strikeouts.

Bryce Fowler, Germantown: Went 7-for-13 with a home run and two RBIs at the plate and threw a complete game shutout with no walks and 10 strikeouts in a 6-0 win over South Panola.

Hunter Elliott, Tupelo: Went 3-for-7 at the plate with two doubles, three RBIs and two runs scored in a three-game series win over DeSoto Central. Also pitched five innings in the series opener, allowing no runs on one hit with three walks and eight strikeouts to pick up the win.

Ryan Herbison, Northwest Rankin: Went 8-for-9 at the plate with four doubles, a triple, six RBIs and seven runs scored in three wins over Terry, Ridgeland and Pearl. Also picked up a save against Ridgeland, allowing one hit in four innings of work with seven strikeouts.

Ross Highfill, Madison Central: Went 3-for-8 at the plate with a grand slam, five RBIs and two runs scored in back-to-back wins over Clinton.

Niko Mazza, Madison-Ridgeland Academy: Went 5-7 at the plate with a double and a home run, six RBIs, and scored three runs in a three-game series with Presbyterian Christian. He also pitched five scoreless innings, allowing four hits with five strikeouts and three walks.

Jackson McCoy, Booneville: Went 7-for-12 at the plate with four doubles, a triple, five RBIs and two runs scored in two wins over Kossuth and a win over New Albany.

Davis Oswalt, Nettleton: Went 3-for-5 at the plate with a home run, four RBIs and a run scored in a two-game sweep of Belmont.