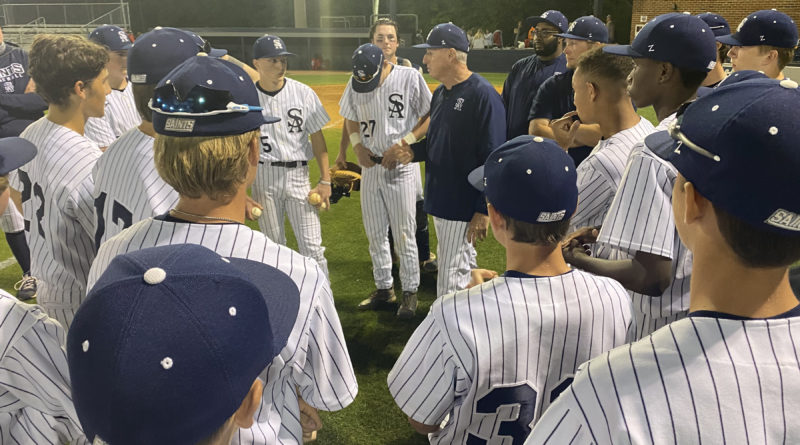 RIDGELAND — There are pitcher’s duels, and then there’s what happened between St. Andrew’s and Magee Thursday night at Barkett-Cummings Field.

“Just a great, great baseball game,” St. Andrew’s coach Mark Fanning said. “Those guys got us 10-2 Tuesday night at their place, so for us to come out tonight and get this win is just big for us as a young team.”

For the longest time, it looked like the Saints (17-7) weren’t going to be able to put up a fight.

McNair was dealing early in the game — he cruised through the first three innings, retiring the side in order in each inning and racking up seven strikeouts.

The Saints got their first baserunner via a throwing error in the fourth, and finally broke up McNair’s no-hit bid in the fifth when freshman shortstop Friend Walker laid down a drag bunt and Magee’s third baseman couldn’t get the handle.

Magee (18-5) put up their only run in the first inning when reigning 3A Mr. Football Chandler Magee drew a walk, stole second and third and came home to score on McNair’s double to deep centerfield.

But Azordegan settled down after the first inning and worked around a one-out walk in the second and a one-out single in the third. He walked the leadoff batter in the fourth, but struck out two hitters and got a fly-out to end the inning.

But the jam he got out of in the fifth might have been his best trick. Magee catcher Banks Teater struck out to start the inning, but St. Andrew’s catcher Brett Ashy dropped the ball and cleared the first baseman by about six feet on the throw-down, allowing Teater to reach second base with nobody out. Azordegan struck out the nine-hole hitter, then leadoff man Cayden Bridges and induced a tapper back to the mound from Pittman to end the threat.

“I knew I had a really tough matchup coming into this game,” Azordegan said. “I think the first game (against Magee) really prepared me because I got to see their hitters’ tendencies. I knew I was going to have to mix up my pitches, because if I threw a bunch of fastballs, they were just going to be sitting on it, and I thought I did a good job of that.”

The Saints’ offense finally gave him some support in the sixth. Rolen Fanning led off the inning by beating out an infield single and came around to score when Ashy bombed a double to deep right-center on a 2-0 fastball from McNair.

“(McNair) is just a really tough matchup,” Ashy said. “I think in my first two at-bats, I just wasn’t ready. He was working so quickly and he was in such a groove, hitting 88 on the corners. I just had to slow things down and take a couple of pitches there in that last at-bat and I finally got one I could drive.”

That evened the score at 1-1, but the tie didn’t last long. Ashy’s courtesy runner Walker Van Meter advanced to third on a passed ball and scored the go-ahead run on Azordegan’s sacrifice fly to give the Saints the 2-1 lead.

Azordegan retired two of the three batters he faced in the seventh before he hit the limit of 120 pitches. Sophomore Andrew Carron came on in relief and struck out Bridges to end the game.