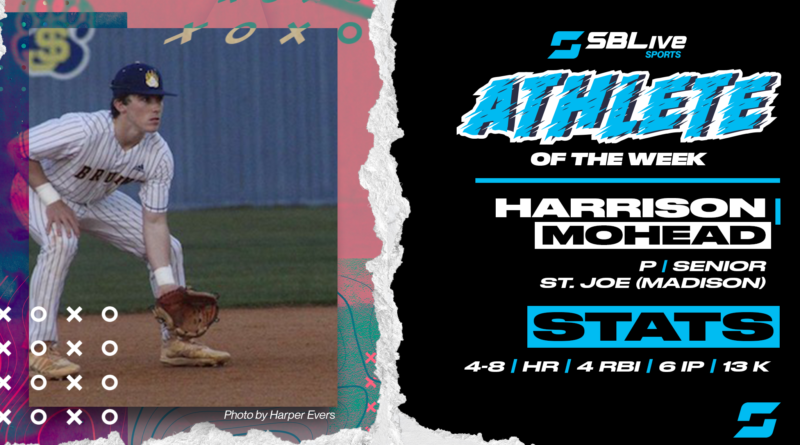 Mohead received 44.59% of the vote, beating out Oxford’s Hays Roth who finished second with 24.15%. DeSoto Central’s Brock Tapper finished third with 12.85% and Madison Central’s Braden Montgomery finished fourth with 9.03%. There were over 29,000 votes tallied this week!

Here are the other athletes who were nominated for April 5-11:

Hunter Bagwell, South Pontotoc: Pitched seven innings without giving up a run to pick up the win in the second of two wins over Shannon for the Cougars, striking out 13 batters without issuing a walk. Also went 2-for-9 at the plate with a walk, double and a run scored.

Devin Culberson, Harrison Central: Went 4-for-10 at the plate with a walk, a double, a triple, a home run and four RBIs in a three-game sweep of Hancock. Also pitched four innings in Game 1 to pick up a win, striking out six and allowing just one earned run on one hit.

Hunter Elliot, Tupelo: Went 2-for-9 a the plate with a walk, a double, two RBIs and a run scored in a three-game series loss to Lewisburg. Also pitched seven innings in the series opener, giving up one hit and striking out 15 batters without issuing a walk.

Ryan Herbison, Northwest Rankin: Went 2-for-4 at the plate with two home runs, six RBIs and two runs scored in a 16-10 series-opening win over Brandon.

Peyton Martin, Madison-Ridgeland Academy: Went 4-for-5 at the plate with a home run and seven RBIs in a three-game sweep of Jackson Academy.

Braden Montgomery, Madison Central: Went 7-for-10 at the plate with a double, two triples, a home run and five RBIs in a three-game sweep of Warren Central. Also pitched six innings to pick up the win in Game 1, striking out 16 and issuing two walks without giving up a hit.

Hays Roth, Oxford: Went 7-for-11 at the plate with three doubles, a home run, five RBIs and three runs scored in a three-game sweep of Hernando.

Kros Sivley, Sumrall: Worked eight scoreless innings in a 3-0 win over Purvis, striking out 14 and only giving up four hits without issuing a walk.

Brock Tapper, DeSoto Central: Went 6-for-9 at the plate with two doubles, a home run, five runs scored and seven more driven in. Also pitched three innings in relief without giving up a hit and striking out six of the nine batters he faced.