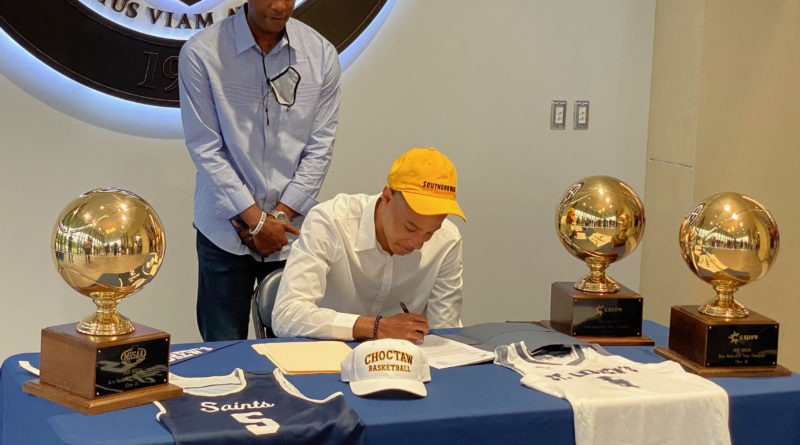 RIDGELAND — The recruiting process can be hot and heavy, but for St. Andrew’s star and three-time state champion Rashad Bolden, nothing was rushed.

That’s part of the reason why his announcement Wednesday — that he would play his college ball at the University of Southern Mississippi — was so special.

“Rashad is not one of those kids who wants to put his business out there and create hype or anything like that,” his father Randy Bolden said. “He played things closer to the vest and took his time making the best decision he could for himself.”

And boy, was a it a tough one.

Bolden grew up idolizing and emulating his father Randy, the head basketball coach at Division II Mississippi College. In the end, he decided the merits of playing Division I at Southern Miss for coach Jay Ladner out-weighed playing for his father.

“My dad is my number one guy,” Bolden said. “I wouldn’t be the person or the player I am today without him… . It’s always been a dream to play for him. He’s been working me out since day one, and he’s my dad, so I know he’s always going to be looking out for me and pushing me to be the best.”

He described the decision to turn down the offer from his father to play at Mississippi College as one of the toughest he’d ever made.

The choice of both Ladner and the elder Bolden to offer Rashad a basketball scholarship was much easier.

The three-time state champ and two-time title-game MVP helped St. Andrew’s to a 51-8 combined record in his junior and senior seasons. The 6-foot-1 guard averaged 26.5 points, 4.4 rebounds and 3.5 assists as a senior last season, when he led the Saints to a 22-2 record.

He was at his best when the lights came on, too. He scored 23 points in the Saints’ 59-32 win over Booneville in the state championship game, hitting all three of his 3-point attempts and shooting 10-for-10 from the free-throw line.

“I think his accomplishments here really speak for themselves,” St. Andrew’s coach Russell Marsalis said. “But he’s set the tone for the program and all the younger guys on the team who saw him come in and spend the extra time working on his game, working in the weight room and working in the classroom.”

Bolden will join a Southern Miss team coming off an 8-17 season in 2021 with a 4-13 record in Conference USA under Ladner, who is entering his third year with the program.

And while Randy Bolden and Ladner have known each other for more than a decade — Bolden was coaching at Meridian while Ladner was at Oak Grove in the early 2010’s — they are about to be a little closer thanks to Rashad.

“I’m sure we’ll talk about some scrimmaging or maybe even a non-conference game,” Bolden said Wednesday. “But I’ll tell you this right now: Rashad will have to be on the IR or something, because I don’t think I could coach against him.”