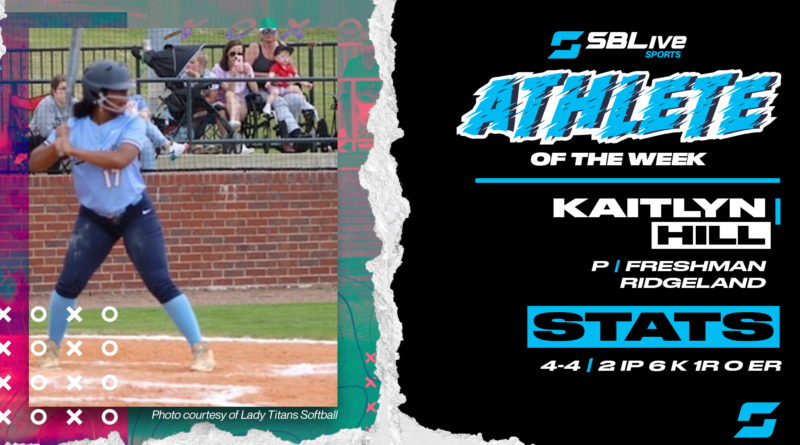 Hill went 4 for 4 at the plate in a 21-1 win against Canton. She also pitched 2 innings and had 6 strikeouts allowing only 1 run, finishing the game with an era of 0.00.

Hill received 44.51% of the vote, beating out Walnut’s Cadence Rolison, who finished with 31.38%. Walnut’s Elizabeth Glissen finished third with 19.04% and Northwest Rankin’s Sydney Phillips was fourth with 3.82%. There were over 41,000 votes tallied this week!

Here are the other athletes who were nominated for March 29-April 4:

Holly Craft, Raleigh: Gave up just one run in 14 innings of work in the circle in back-to-back wins over Morton and Taylorsville. She gave up eight hits, issued two walks and struck out 19 batters.

Paige Kilgore, Houston: Went 7-for-10 at the plate with three doubles and three RBIs and allowed just one earned run in 13.2 innings with 29 strikeouts in a 3-0 week for the Lady Hilltoppers.

Ramsey Montgomery, Mantachie: Went 3-for-4 at the plate with two doubles, a home run and two RBIs and struck out 14 hitters in seven innings of work to pick up the win in a 12-0 victory over East Union.

Sydney Phillips, Northwest Rankin: Went 7-for-11, scored seven runs and drove in four more in a 2-2 week for the Lady Cougars.

McKaylee Polk, Senatobia: Went 4-for-8 at the plate, scored five runs and drove in another in a two-game series with Kosciusko. Also picked up the win in the second game, allowing three runs on eight hits in seven innings of work in the circle.

Cadence Rolison, Walnut: Went 14-for-15 at the plate with four doubles and drove in eight runs in a 3-2 week for the Lady Wildcats.

Celeste Study, St. Martin: Threw a no-hitter against Picayune, working all seven innings of a 2-0 win and striking out nine batters while issuing just one walk.

Megan Vinson, DeSoto Central: Went the distance to pick up the win in a 5-0 victory over Lewisburg, allowing just two hits in seven innings with 17 strikeouts and one walk. Also went 4-for-5 at the plate with two RBIs.

Savannah Wilbanks, DeSoto Central: Went 3-for-5 at the plate with a double, drove in four runs and scored five more in back-to-back wins over Barlett (Tennessee) and Lewisburg.