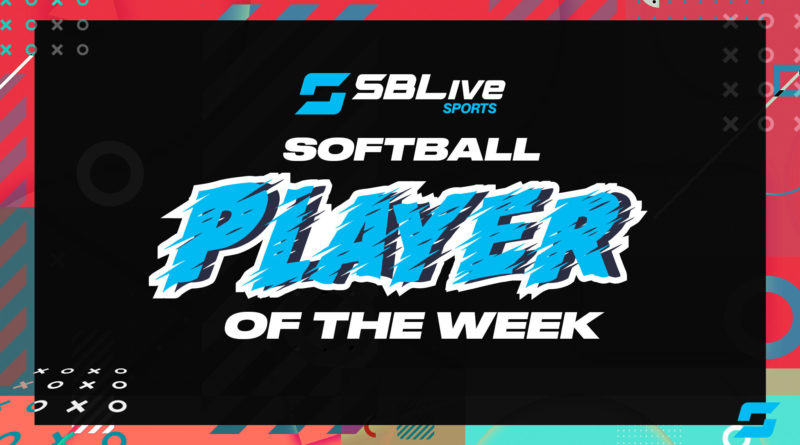 Here are the candidates for SBLive’s Mississippi high school softball player of the week for April 5-11 as nominated by fans, readers and SBLive’s staff. Read through the nominees and cast your vote at the bottom of the page. Voting will conclude on Sunday at 11:59 p.m and the winner will be announced Monday. If you would like to make a nomination in a future week, please email regan@scorebooklive.com or tag us on Twitter or Instagram at @sblivems.

SOFTBALL PLAYER OF THE WEEK NOMINEES FOR APRIL 5-11:

Kinley Ainsworth, Puckett: Went 7-for-11 at the plate with a double, two triples and a home run over a 3-0 week for the Lady Wolves.

Brandi Bond, Sumrall: Went 8-for-18 at the plate with three doubles, two home runs, 10 RBIs and eight runs scored over a 4-0 week for the Lady Bobcats.

Riley Eyster, Hernando: Went 8-for-14 at the plate with a double, a home run, six RBIs and eight stolen bases and 10 runs scored in a 4-0 week for the Lady Tigers.

Torrie Jones, Terry: Went 5-for-9 at the plate with a double, two triples, two RBIs and scored eight runs in back-to-back wins over Murrah and Natchez. Also pitched 10 combined innings in the two victories, giving up three earned runs with 18 strikeouts.

Isabel Martin, Pearl River Central: Went a combined 5-for-7 at the plate with a double, a triple, three RBIs and seven runs scored in a win over Picayune and a loss to Sumrall.

Sydney Phillips, Northwest Rankin: Went 6-for-12 at the plate with a triple, four RBIs and five runs scored in a 2-2 week for the Lady Cougars.

Kacey Stampley, Columbia: Went 2-for-3 the plate and pitched 13 combined innings without giving up an earned run in back-to-back wins over Bogue Chitto and Magee, striking out 15 hitters.

Megan Vinson, DeSoto Central: Went 2-0 in the circle for the Lady Jaguars without giving up an earned run. She gave up just five hits and a walk and struck out 26 batters.

Jamyiyah Cotten, Madison Central: Cotten was 8-for-11 at the plate for the Lady Jags. She had 2 doubles, 1 home run, 4 RBIs, and 7 runs scored.