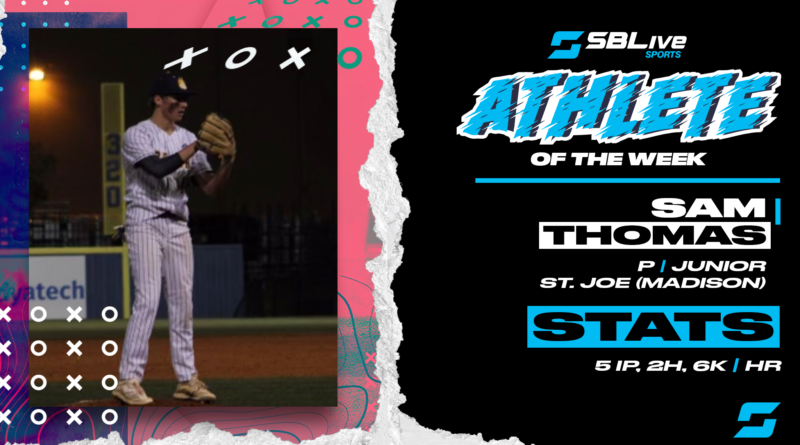 The junior picked up the win on the mound 12-0 win over Vicksburg, allowing just two hits and striking out six in five innings of work. He also helped his cause at the plate with a two-run home run.

Thomas ran away with this week’s honor, receiving 91.32% of the total vote.

Here are the other athletes who were nominated for March 29-April 4:

Alex Childers, Oxford: Went 4-for-4 at the plate with two walks, a home run, four RBIs and scored five runs in the three-game series sweep of Horn Lake.

Caleb Dyess, Pearl River Central: Gave up one run on two hits in 4.2 innings of work in the first half of a double-header against Poplarville, then went 2-for-3 at the plate with a homer and four RBIs in the second game.

Bo Jaggers, Tupelo: Went a combined 5-for-7 at the plate, drove in one run and scored six more in a three-game series sweep of Olive Branch.

Andrew Knight, Sumrall: Pitched six innings in a 9-0 win over Greene County without giving up a hit or a run and racked up 12 strikeouts.

Niko Mazza, Madison-Ridgeland Academy: Gave up one run on four hits with 16 strikeouts and two walks in 6.2 innings of work in the series opener against Jackson Prep. (The Patriots had to forfeit the game because Mazza threw 119 pitches — nine more than MAIS rules allow.)

Nick Monistere, Northwest Rankin: Went 3-for-3 at the plate with three RBIs and went the distance on the mound in a 4-0 win over Pearl, allowing just five hits in seven innings with seven strikeouts.

Carson Robb, Vancleave: Helped Vancleave respond to an early-week loss to St. Stanislaus by allowing just one run on two hits in seven innings of work against the Rockachaws Thursday night, striking out 13 hitters.

Brayden Sanders, Lewisburg: Went 4-for-9 at the plate with an RBI and scored two runs in a three-game series against DeSoto Central. He also picked up the win on the mound in game two, allowing two hits and striking out six batters in four innings of work.

Landon Scruggs, Center Hill: Allowed just one earned run on two hits in eight innings with seven strikeouts to pick up the win in a 3-2 victory over Saltillo, which swept the other two games from the Mustangs by a combined score of 15-3.

Ramsey Montgomery, Mantachie High School:Tallied 25 strikeouts out of 36 total batters faced. Went 6 for 8 at the plate with a home run, 3 triples and 2 doubles.