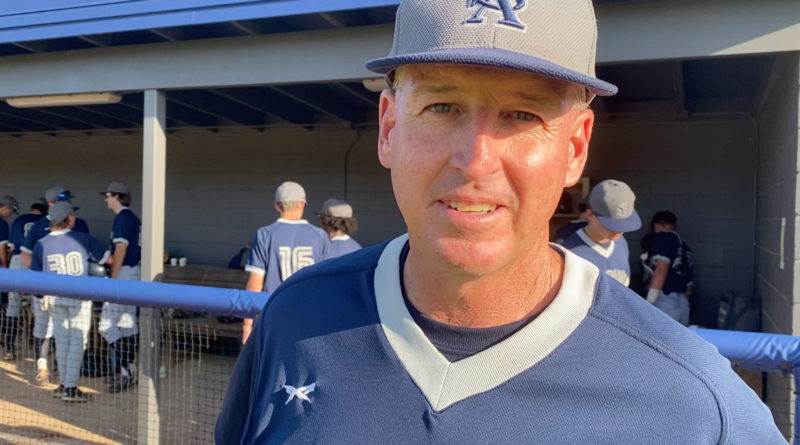 CAMDEN — St. Andrew’s coach Mark Fanning never thought he would make a career out of coaching and teaching at the small private school in Ridgeland when he took over the baseball program.

Twenty-five years later, he’s done a lot more than make a career out of it.

On Monday afternoon, Fanning won his 500th game as a head coach as the Saints blew past Velma Jackson 19-0.

“500 wins means you’ve been coaching a little while, because it takes a while to get there,” Fanning said. “It’s special also because all 500 of these were at St. Andrew’s, which rarely happens. I’ve had friends that have had four or five jobs now, but I got one job out of college and have been there ever since.”

And what a job he’s done for his one employer — the Saints have played an average of 28 games a season and average around 22 wins a year. They are a perennial playoff contender, and won the 3A State Championship in 2018.

Another aspect to Monday’s game that made Fanning’s 500th win so special was the pitcher of record — Mark’s son Rolen Fanning. The St. Andrew’s freshman worked two of the three innings and gave up one hit with three strikeouts to get the win.

“It really just kind of worked out that way,” Fanning said. “We had a 10-inning game over the weekend and the guy who was going to start this game had to work some in relief, so Rolen drew the start. But it’s really neat because I was the starting pitcher for my father when he won his 200th game, so we’ve kind of come full circle now.”

Mark’s father, Mack Fanning, coached football, baseball and softball at the old Hickory High School and later at Newton County when the school’s consolidated. He was honored by the Mississippi Association of Coaches in 2018 to commemorate his 50 years of service in the state’s public school system.

Fanning said Monday he originally planned to coach at a public school for at least 25 years, but things changed when he got to St. Andrew’s.

“I’m at a place where they are very supportive of athletics and I’ve had players who do everything you ask of them,” Fanning said. “So I couldn’t have asked for a better situation.”

They are young, with 13 freshmen on the 23-man roster, but they have some talent.

Monday afternoon, those freshman accounted for much of the offensive production — Friend Walker provided an RBI on two hits, Rolen Fanning picked up an RBI on two hits and outfielder Ian McMillin drove in three runs with a bases-clearing double.

“We feel like this group of freshmen have a chance to be very good when they get more experience under their belts,” Fanning said. “But they are playing well right now and have risen to the challenge and competed in every game we’ve played.”