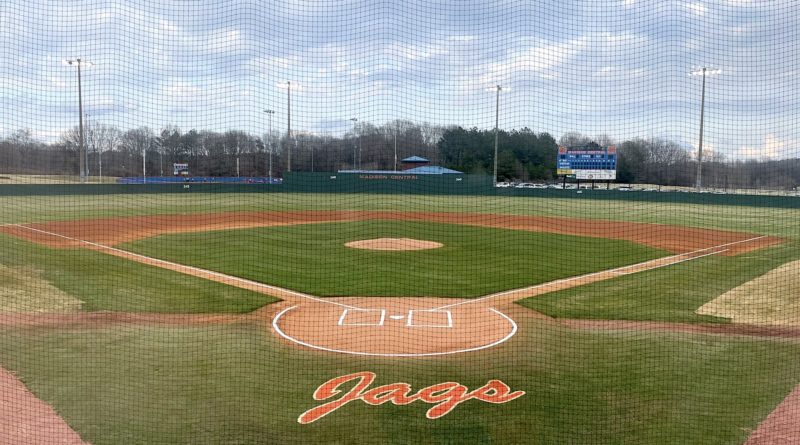 MADISON — Another week, another region sweep for nationally-ranked Madison Central.

The Jaguars dispatched Warren Central in both sides of a doubleheader Saturday at Jaguar Field, beating the Vikings 16-3 and 13-2 to complete the three-game sweep after beating them 6-0 earlier in the week.

“In the first game of the series, we didn’t hit like we wanted to,” Madison Central catcher Ross Highfill said. “So we just had to bear down and we got in the cages and put in some extra work. We let that extra time for us and we were able to finish.”

And finish they did — the Jaguars (21-0, 6-0 in Region 6-4A) poured on nine runs in the first three innings Saturday, then touched three different Warren Central pitchers for seven runs in the fourth to put the first game of the doubleheader away.

The Jags got two runs in the first, and Stanford commit Braden Montgomery broke the game open with a three-run home run in the second inning.

Warren Central starter Jack Wright seemed to have righted the ship with two quick outs to start the third inning, but the Jaguars strung together four two-out hits in a row — highlighted by Gatlin Sanders’ two-RBI double — and plated four more runs to put the game out of reach.

Madison Central starter Beau Bryans got some much needed rest after two innings, and Austin Tommasini finished things off by limiting the Vikings (4-15, 1-5 in 4-6A) to one run over the final four innings before the game was called due to the 10-run rule.

The second game was more of the same.

The Jaguars two Connors – seniors Connor Chisolm and Connor Nation – both produced two-RBI doubles in the first inning to give the Jags the early 4-0 lead. Warren Central got a run back in the bottom of the first on Braxton McCureley’s RBI single, but Madison Central starter Ranard Grace struck out Wright to end the threat.

The Jaguars chased Warren Central starter Kylan Landers in the second inning after a Gatlin Sanders RBI double, a Hunter Hines RBI single, a RBI triple from Montgomery and a RBI single from Chisolm.

The Jaguars added a run in the third and two more in the fourth on Hines’ second home run of the series to put the game out of reach.

As good as the hitting has been for Madison Central, the pitching has been special. After Saturday’s doubleheader, Jaguar pitchers have now allowed just 23 runs in 21 games.

“There’s not a single pitcher who can’t throw it by someone,” Highfill said. “We had a bunch of guys last year who were committed to SEC programs and this group this year has followed that up, much in the same way. There’s not much slack there.”

In the second game Saturday, it was Grace who stood out. He gave up just three hits and pitched extremely well in tough situations. After working his way out of the jam in the first inning, he got back-to-back strikeouts to end a two-on, one-out jam in the second.

“Right now, it’s about keeping batters off balance,” Grace said. “Being able to throw strikes with the fastball and being able to throw off-speed for strikes. Then it’s about going out and competing when you don’t have your best stuff. But this staff is fun to be a part of. We’ve got guys who can really throw hard and other guys who don’t throw as hard, but can really move the ball well. It’s a great staff to be a part of, and we seem to learn from each other every day.”

Up next for the top-ranked team in Mississippi is a three-game set with Clinton, which begins Tuesday night on the road.

“We just need to go compete,” Robey said. “We want to take the rest the this weekend to rest and get some good food in them. We know Clinton had some success against Warren Central. They are young, but they are athletic and very well-coached. For us, it comes down to focus, because there’s so much talent around here that you can go two or three miles down the road and get beat. So, you really need to bring your A-game every night, and we’ve been fortunate enough to do that so far.”