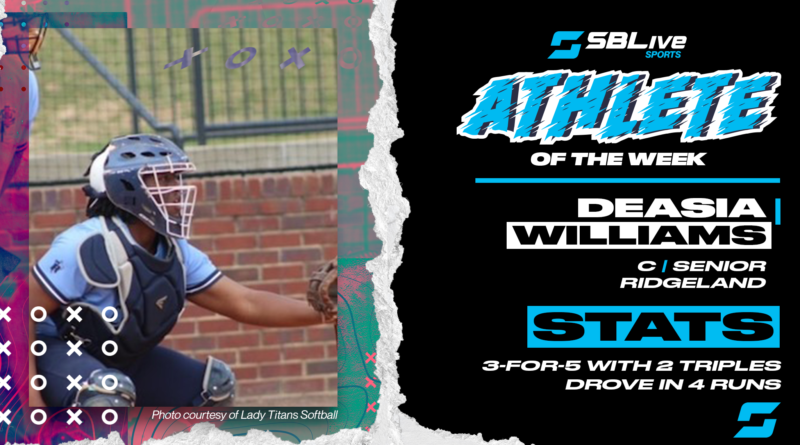 Congratulations to Ridgeland senior DeAsia Williams for being voted SBLive’s Mississippi High School Softball Player of the Week for March 22-28!

The senior went 3-for-5 with two triples and drove in four runs in a 21-15 win over Forest.

Williams received 27.1% of the vote, beating out Walnut’s Cadence Rolison, who finished with 24.43%. Senatobia’s McKaylee Polk finished third with 19.53% and Northwest Rankin’s Chloe Miller was fourth with 9.79%. There were over 60,000 votes tallied this week!

Here are the other athletes who were nominated for March 22-28:

Kira Finkley, Grenada: Went 3-0 in the pitching circle, allowing just four hits in 14 innings of work with 28 strikeouts and four walks for the Lady Mustangs. Also went 5-for-7 at the plate and drove in seven runs on two doubles and two triples.

Blakely Gill, Houston: Went 6-for-9 at the plate with a double, a triple, two home runs and 13 RBIs in a 3-0 week for the Lady Toppers.

Chloe Miller, Northwest Rankin: Went 4-for-5 with a home run and scored three runs and drove in three more in back-to-back blowout wins over Terry.

McKaylee Polk, Senatobia: Went 5-for-5 at the plate with two doubles and a homer, driving in four runs in back-to-back wins over Center Hill and Cleveland Central.

Cadence Rolison, Walnut: Went 7-for-10 with two doubles and drove in five runs and gave up two earned runs on seven hits with 18 strikeouts in 11 innings of work in the circle in a 3-0 week for the Lady Wildcats.

Julia Shaw, Hernando: Allowed just one earned run on nine hits in 14 innings of work in the pitcher’s circle, striking out 15 hitters to pick up wins over DeSoto Central and South Panola.

Kacey Stampley, Columbia: Went 2-for-5 with one triple and drove in four runs in back-to-back wins over Seminary and Perry Central. Also picked up the win against Seminary, striking out six batters over seven innings to pick up the win.

Megan Vinson, DeSoto Central: Went 10-for-20 with two doubles, one triple and a home run and drove in seven runs in four games for the Lady Jaguars.

Jadyn Burney, Harrison Central: Shortstop committed 0 errors in 4 games. She picked up 9 hits, 1 triple, 2 doubles and scored 5 runs. She also picked up 3 stolen bases. Had a total of 5 RBI’s while batting leadoff for the Red Rebelettes.

Kayla Moran, Harrison Central: Threw a complete game 1 hit shutout to shut down Oak Grove 3-0. She struck out 10 in the win. She also picked up 2 hits and scored once in the win.