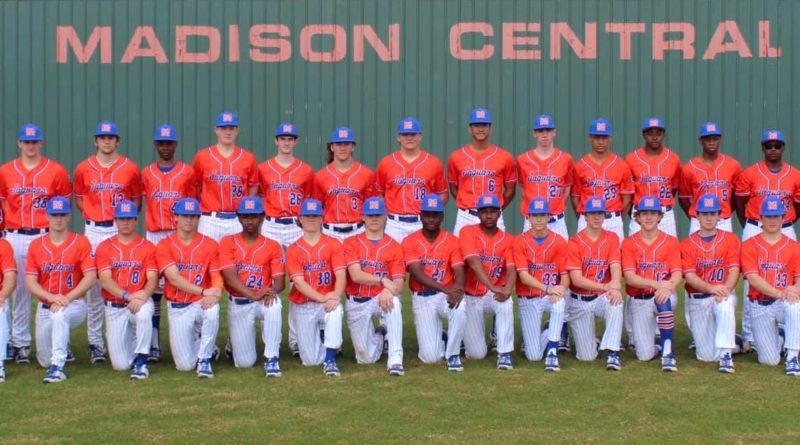 JACKSON — After Madison Central claimed its latest victim by dispatching the Murrah Mustangs on a chilly Tuesday afternoon at Smith Wills Stadium, Jags coach Patrick Robey cracked a smile when asked if this is the best team he’s ever coached.

It’s easy to see why he feels that way — there aren’t many coaches in Mississippi’s rich baseball history who have had more to work with than Madison Central’s sixth-year head coach has at the moment.

The undefeated Jaguars (18-0) are ranked atop practically every statewide poll, including the SBLive Power 10. But they are also starting to garner some national attention. They’re currently ranked No. 2 nationally by baseballnews.com and moved up to No. 15 in Perfect Game’s latest Top 50.

Looking at the lineup and pitching staff, it’s easy to see why. The Jags are loaded for bear, with five future Division-1 signees or commits in the lineup on most nights and a slew of prospects who have committed or signed to compete at the junior college level.

The three-hole hitter — centerfielder Braden Montgomery — plays a beautiful defensive game and throws 96 off the mound. He signed with Stanford, but will likely have a decision to make as a projected top-50 pick in July’s Major League Baseball draft.

Junior catcher Ross Highfill is committed to Southern Miss. If he does wind up in Hattiesburg, he’ll be reunited with Jaguar senior Creek Robertson, who signed with the Golden Eagles during the latest signing period. Junior left-handed pitcher Beau Bryans is committed to Auburn.

Senior second baseman Connor Chisolm and left-handed pitchers Connor Nation and Ranard Grace are all set to play at Hinds Community College next season. Leadoff hitter Gatlin Sanders, another junior, is getting a ton of attention from junior college coaches already.

Then there’s senior Hunter Hines, the left-handed cleanup hitter who can play catcher or either corner infield position. The Mississippi State signee may be the purest hitter in the state.

With all that talent, it’s not uncommon to see a half-dozen scouts at any given practice. One junior college recruiter attended a junior varsity game last week to scout Jake Cook, a Madison Central underclassmen who touches 88 miles-per-hour on the mound from the left side.

“The thing that’s special about this team is they are obviously talented, but they’re also hungry,” Robey said. “It doesn’t matter whether it’s the New York Yankees, the Atlanta Braves or the Northwest Rankin, these guys play hard every day. That’s the fun thing about this team — they enjoy playing the game.”

That recipe is working for them at the moment. They went on to sweep the three-game series with Murrah, beating the Mustangs 22-0 in two innings and 13-1 in three in a double-header Friday.

The attention they are getting is well-deserved, but as former Hattiesburg and Sumrall coach Larry Knight knows, it can be a double-edged sword. Knight, now the pitching coach at Jones County Junior College, was the last Mississippi coach to lead a team to a national No. 1 ranking when he won 68-straight at Sumrall.

“It’s fun to get that kind of attention that comes along with success, but it’s also tough,” Knight said. “That year after we went undefeated, we went into every game knowing we were going to get the other team’s best shot, and they knew exactly what we were bringing to the table.”

Knight said being the head coach of a team with that much talent can be daunting, but said Robey is the perfect coach for Madison Central right now.

“Patrick is a great coach and an even better guy and I’m really happy for him,” Knight said. “I told him a couple of weeks ago to just enjoy the ride and later you he can look back and say ‘Man, did that really happen?’”

But first things first, the Jaguars have some unfinished business.

Next week, they open a three-game series at Warren Central before finishing region play with Clinton on April 13 and April 15. If they can replicate Sumrall’s magical run in 2009 and 2010, they can bring home the program’s first state title since 2016.

“We are trying to keep the same goal and expectation of getting the ring at the end of the year and playing four weekends in May,” Montgomery said. “We try not to pay too much attention to the rankings that may be out there nationally and just focus on every team we have to play, day-to-day. This week, we were focused on Murrah. I’m not really sure what comes next, just taking it one team and one game at a time.”