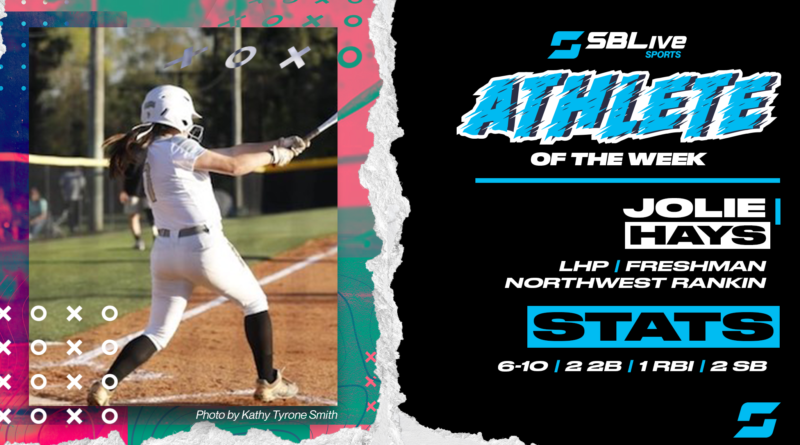 The freshman went 6-for-10 at the plate over three games with two doubles, one RBI and two stolen bases in the leadoff spot for the Lady Cougars.

Hays received 43.1% of the vote, beating out DeSoto Central’s Arin Dale, who finished with 40.18%. Hernando’s Emme Muizers finished third with 9.6% and East Union’s Emily Coggin was fourth with 5.84%. There were over 147,000 votes tallied this week!

Here are the other athletes who were nominated for March 15-21:

Emily Coggin, East Union: Went 6-for-9 at the plate in a 3-0 week for East Union, mashing four home runs and driving in 10 runs.

Arin Dale, DeSoto Central: Went 6-for-10 at the plate over four games with a double, a triple and two RBIs in a 2-2 week for the Lady Jaguars.

Kira Finkley, Grenada: Pitched 12 innings in wins over Lafayette, Southaven, and DeSoto Central, giving up just three runs. Finkley had 21 strikeouts and was 4-for-7 hitting with a homerun and 4 RBIs.

Natalie Herrington, Petal: Pitched 14 innings over two games in wins over Greene County and Poplarville without giving up a hit or an earned run and striking out 31 batters and issuing just one walk.

Paige Kilgore, Houston: Pitched a combined 12 innings in back-to-back wins over Eupora and Corinth. She gave up just two earned runs on five hits, struck out 22 batters and issued just one walk.

Emme Muizers, Hernando: Went 4-for-5 at the plate over three games with two home runs and five RBIs in a 3-0 week for the Lady Tigers.