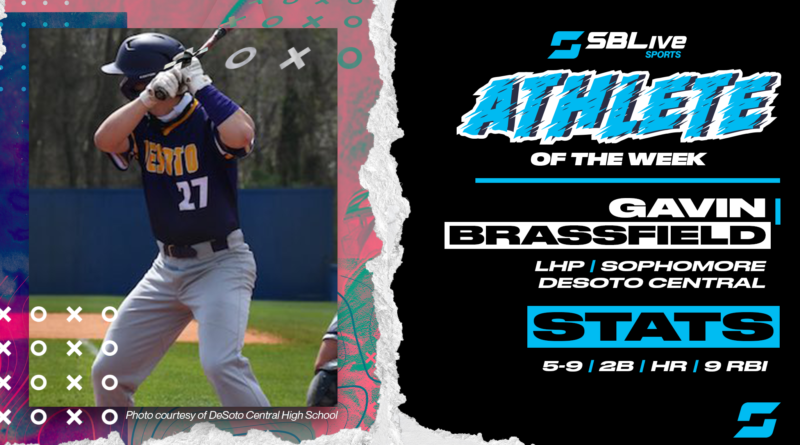 Brassfield went 5-for-9 at the plate with a double, a home run and nine RBIs as the Jaguars went 3-2 over five games over the week of spring break.

Brassfield received 50.45% of the vote, beating out DeSoto Central’s Coleman Haltom, who finished with 20.32%. Jackson Prep’s Will Gibbs finished third with 6.1% and Tupelo’s Hunter Elliott finished fourth with 4.71%. There were over 17,000 votes tallied this week!

Here are the other athletes who were nominated for March 15-21:

Alec Adams, Forrest County AHS: Threw 116 pitches in nine innings of work for the Aggies without giving up an earned run, striking out six batters and issuing just one walk in an extra-inning loss to Poplarville.

Jordan Belsome, Poplarville: Worked 7.2 innings in a 4-1 extra-inning win over Poplarville, giving up just one earned run on two hits with 19 strikeouts and three walks.

Hunter Elliott, Tupelo: Hit a grand slam in a 9-1 win over Pontotoc, then went 2-for-4 and drove in five more runs in a 13-1 win over Itawamba AHS.

Will Gibbs, Jackson Prep: Scattered three hits over six innings without giving up a run in a 3-0 win over West Harrison, striking out 12 batters without walking any.

Coleman Haltom, DeSoto Central: Scattered five hits over seven innings in two outings for the Jags without giving up an earned run, striking out eight batters without issuing a walk.

Max Miller, Vancleave: Worked all four innings of a 10-0, run-rule shortened win over Pillow Academy without giving up a hit, striking out nine batters without issuing a walk.

Gatlin Sanders, Madison Central: Went 5-for-9 with seven RBIs, two walks and three stolen bases in a 3-0 week for the Jaguars.

Carson Robb, Vancleave: Pitched six innings without giving up a hit or an earned run in a 10-1 win over Oak Grove, striking out 10 batters without issuing a walk.