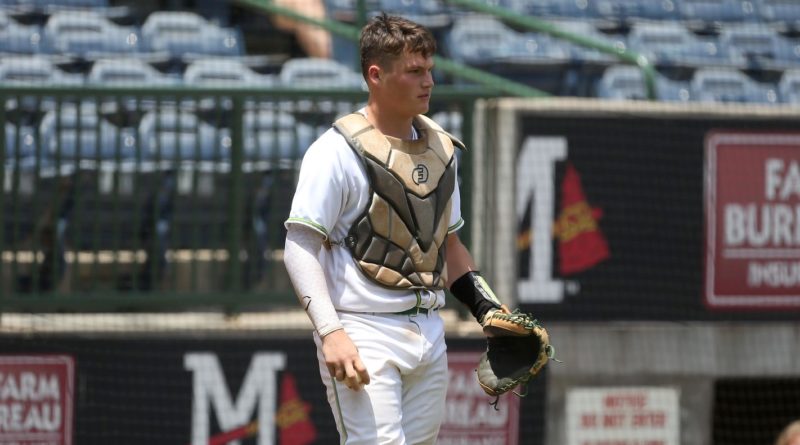 With the Mississippi high school baseball season officially underway, SBLive is taking a closer look a the Top 30 baseball players to watch for the Magnolia State’s junior class.

Everyone ought to be familiar with MRA’s strapping young outfielder Stone Blanton. He’s a first-team all-state linebacker who doubles as the Patriots’ power-hitting outfielder. Through 14 games as a junior, he’s batting .321 with 13 RBIs. At 6-foot-3 and 225 pounds, Blanton is committed to become a two-sport star at Mississippi State.

Speed is the name of the game with slick-fielding South Panola outfielder Emaarion “Mari” Boyd. He’s 6-feet and 160 pounds with a quick bat and can absolutely fly on the base paths. Through 14 games as a junior, he’s hitting .509 with 16 runs score, 16 RBIs and has stolen 10 bases. He remains uncommitted.

The upside on Hartfield Academy star outfielder Colton Bradley is tremendous. He’s 6-foot-2 and 185 pounds with good power from the right side of the plate and is a plus-plus defensive player. He verbally committed to accepting a scholarship offer from Mississippi State last year, despite his entire sophomore season being wiped out by COVID-19.

Madison Central is absolutely loaded because of guys like Bryans. He’s just 5-foot-10 and 170 pounds, but you can play him at any position in the outfield when he’s not on the mound. He bats right, and hit for a .375 average in 43 plate appearances before the season shut down last season. He pitches with his left arm and posted a 2.69 ERA in 13 innings of work on the mound. Bryans is committed to Auburn.

Burton was on recruiting radars before his sophomore season was washed away by COVID-19. Barring unforeseen circumstances, more are like to take notice this year. Burton has good size at 6-foot-2 and can absolutely rake from the right side. On the mound, he’s got a mid-80’s fastball with a good curveball. Burton’s currently committed to Meridian Community College.

Everybody ought to know Jackson Cheek’s name by now. He burst onto the scene as a freshman in 2019, when he hit .400 in 25 games. He was off to an even better start in 2020 — he was hitting .423 in 26 at-bats — before the season stopped. He’s added some pop in his bat this season, too. Cheek is currently batting .361 in 36 at-bats with three home runs through 14 games. He remains uncommitted.

If anyone is primed for a breakout season, it’s Tishomingo County’s sensational shortstop Spence Coffman. The right-hander does some pitching, but he makes his bones defensively and at the plate, where he’s got a quick, compact swing that has helped him hit .254 in 136 plate appearances since his debut as a freshman in 2019. He’s got a slender frame at 6-feet and 175 pounds, meaning he’s got lots of room to grow, and remains uncommitted on where he’ll play college ball.

There’s guys who can mash and then there’s guys who just look good getting off the bus. Big 6-foot-4, 200-pound Pontotoc third-baseman/right-handed pitcher Brice Deaton is both. He is a staple in the middle of the Pontotoc lineup who was batting .500 in 30 at-bats when the pandemic hit last year. He remains uncommitted, but is an excellent student with a 4.0 GPA.

Unlike a lot of juniors on our list, there’s not a lot of guesswork when it comes to Taylorsville catcher/corner infielder Karson Evans. The 6-foot-2 Evans has been an everyday starter for the Tartars since seventh grade, and batted .398 in 131 plate appearances with 34 RBIs in his last full season as a freshman. Evans is committed to the University of Houston.

Forsythe is the No. 2-ranked player in Mississippi’s class of 2022, according to Perfect Game, and he can do a little bit of everything. On the mound, the 6-foot-, 175-pound right-hander has a fastball that tops out around 90 miles-per-hour and a good curveball. In the field, he’s an elite defender who can play in the middle infield or the outfield. He’s currently committed to Mississippi State.

We don’t know much about Galle, but the right-hander recorded a 2.57 in 16.1 innings of work as a sophomore in 2020 before the season got shut down due to COVID-19. We do know he’s got great size at 6-foot-2 and 180 pounds and that Ole Miss coach Mike Bianco saw enough to offer him last year. He committed to accept that offer last year.

Gibbs is another member of an absolutely loaded infield and pitching staff for Jackson Prep. He packs a punch into his 5-foot-10, 175-pound frame with good pull power from the right side and plays solid defensively at third and second base. He really excels on the mound, where he brings a fastball that tops out around 90 and a hard slider. He’s committed to Mississippi State.

Highfill is a bit of an unknown, but he has turned heads with his strength and athleticism behind the plate. He’s 5 feet and 11 inches of muscle with a strong throwing arm and power from the right side of the plate. He’s currently committed to Southern Miss.

We knew Lewisburg infielder Jacob Hill was going to be special after he was selected second-team All-State after his freshman season in 2019. He’s grown since then, but he’s still small at 5-foot-8 and 150 pounds. What makes him special, other than his defensive prowess, is his quick bat and keen eye — exactly what you want out of your switch-hitting leadoff man. Hill remains uncommitted.

There aren’t many guys on this list as athletic as Canton Academy’s 5-foot-11, 185-pound outfielder Dakota Jordan. Jordan batted .367 as a freshman in 2019 and was hitting .636 through four games last year before Mississippi had to roll out the field tarp for good due to COVID-19. He’s a two-sport athlete who will likely play football at the college level as well. He’s currently committed to Mississippi State.

Ketchum is a 6-foot-1, 200-pound right hander who made the Perfect Game Underclass All-American Top Prospects list this year thanks to a fastball that tops out in the upper 80’s, a hard-breaking curveball and a changeup. He’s committed to Ole Miss.

DeSoto Central keeps cranking out the big-time college and pro prospects, and class of 2022 pitcher/utility man Bradley Loftin is just the latest example. Loftin is ranked as a Top-20 player in the state for his class, and for good reason. The southpaw has command of a mid-80’s fastball and hits for power and average from the left side. He’s currently committed to Mississippi State.

Moffett is another prototypical flamethrower at 6-foot-3 and 225 pounds. His fastball tops out in the low 90’s from the right side. He had already pitched 55 innings for Taylorsville before his sophomore season last year, when he gave up just two earned runs in 16 innings of work with 23 strikeouts. Moffett has announced plans to play his college ball at LSU.

Northwest Rankin has found a stud in Monistere — a 6-foot, 175-pound right hander who can locate his mid-to-high 80’s fastball and a solid mid-70’s slider. He’s already committed to Southern Miss.

There’s not much to complain about with Tupelo’s slick-fielding short stop Mason Morris. He’s tall at 6-foot-4 and 215 pounds with a big frame and can absolutely rake from the right side. Though 35 plate appearances so far this year, he’s hitting .406 with a couple of home runs. Mason’s currently committed to Ole Miss.

Sumrall is loaded with pitching, but if they are going to win a 4A state title, it’s going to be because of guys like shortstop Marshall Phillips. In addition to being a more-than-capable defender, Phillips is a great contact hitter who gets on base at nearly a 50-percent clip. At 6-foot and 185 pounds, he’s not huge. But he was batting .500 in 18 plate appearances as a sophomore before the season was cancelled last year. As a junior through spring break, he had reached base safely 26 times in 36 at-bats.

Porter is wiry strong at 6-foot-3 and 190 pounds and throws hard with a fastball that reportedly tops out at 89 with some sink. Perfect Game ranks him as the No. 16 overall player for the class of 2022, and Porter remains uncommitted.

Jags’ junior Brock Tapper has a similar skillset to his teammate Loftin, but in a bigger frame at 6-foot-2 and 190 pounds. The junior lefty throws a little bit harder as well, with a fastball that tops out in the high 80’s. Tapper is also committed to Mississippi State.

Ray is a prototypical 6-foot-4 right-hander who comes at you downhill with a fastball that tops out in the low 90’s. He is rated by Perfect Game as the No. 5 overall prospect in Mississippi’s class of 2022. He worked 11 innings without giving up a run in 2022 before the shutdown, striking out eight and allowing nine base-runners. Ray’s currently committed to Mississippi State.

If you’re looking for a power-hitting, left-handed bat, look no further. It’s easy to see why Mississippi State threw out an early offer to Hartfield Academy’s 6-foot-2, 200-pound first baseman Lincoln Sheffield. The talented junior has a quick bat and generates a ton of power from his lower body. He committed to MSU in June of 2019.

Tommasini is imposing on the mound at 6-foot-1 and 210 pounds with a fastball that tops out in the high 80’s. He posted a 4.79 ERA in 19 innings last season before the shutdown with 21 strikeouts and 12 walks. We’re excited to see what he can do as a junior with another year of growing under his belt. He remains uncommitted.

St. Joe’s first baseman Chris Watson isn’t your traditional power-hitting first baseman, but at 6-foot-3 and 205 pounds, he’s got so much room to grow. Watson is batting .588 through seven games this season, his first in a starting role. The right hander remains uncommitted.

Oxford’s Ty Wicker has had a slow start to his junior season, but if history is any indicator, the 5-foor-11, 170-pound left-handed hitter will snap out of his early-season slump. The top-of-the-order hitter was batting .375 and had scored nine runs in 10 games when the season ended last season. He was just 4-for-35 through the first 12 games this year, but chances are, he’ll play a key role for the Chargers down the stretch. He remains uncommitted.

Who knows what Lafayette’s athletic outfielder Tyrus Williams could have done with a full sophomore season. After batting .462 with 29 RBIs in 104 at-bats as a freshman, he was batting .517 through 10 games when the season shut down last year. The only hole in his game was his defense, but he’s already shown a ton of improvement in that area, and his speed allows him to chase down just about anything. He’s currently committed to Washington State University.