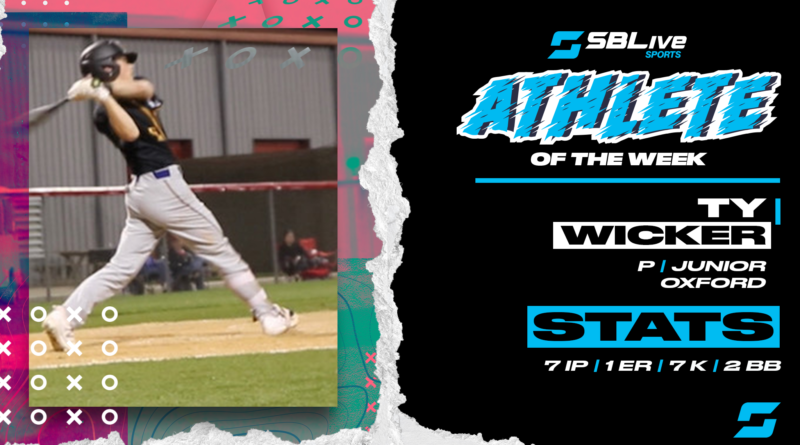 Congratulations to Oxford junior Ty Wicker for being voted SBLive’s Mississippi High School Baseball Player of the Week for March 8-14!

Wicker pitched seven innings and got the complete-game, 2-1 win over Lafayette in the Crosstown Series. He gave up just one earned run on six hits with seven strikeouts and issued a pair of walks.

Wicker received 55.96% of the vote, beating out St. Joseph’s Sam Thomas, who finished with 27.81%. St. Joseph’s Hudson Sandifer finished third with 9.4% and Madison Central’s Hunter Hinds finished fourth with 2.58%. There were over 26,000 votes tallied this week!

Brendon Minor, Madison Central: Pitched five innings without giving up a hit and struck out seven hitters, issuing just one walk in a win over Neshoba Central.

Kade Carpenter, Vancleave: Went 9-for-11 at the plate over three games with three home runs, a triple and two doubles, racking up 10 RBIs.

Zach Beasley, MRA: Pitched four innings in a win over West Jones, allowing one earned run on one hit with 11 strikeouts and two walks.

Sam Thomas, St. Joseph: Went 5-for-8 at the plate over two games with a double and a home run, racking up seven RBIs.

Hudson Sandifer, St. Joseph: Pitched five innings without giving up an earned run or walking a batter, striking out six in a win over Morton.