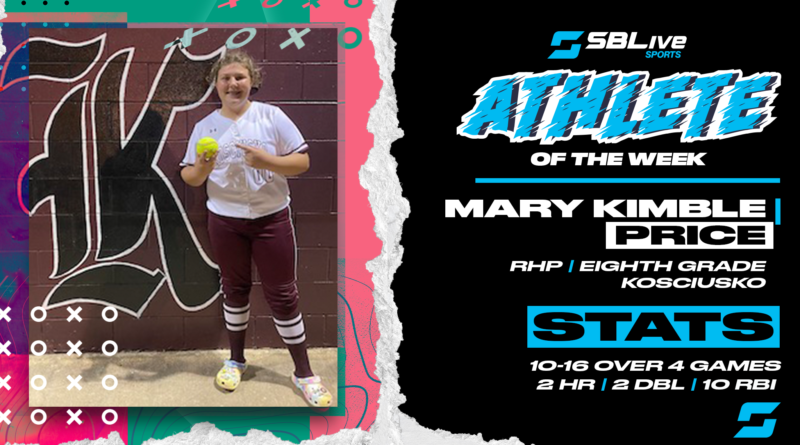 Price went 10-for-16 at the plate over four games with two home runs, two doubles and 10 RBIs in a 3-1 week for the Lady Whippets.

Price received 44.11% of the vote, beating out Hernando’s Jaclyn Carter, who finished with 38.69%. Oak Grove’s Ryanne Hornsby finished third with 7.8% and Ridgeland’s Sydni Stevens was fourth with 5.84%. There were over 66,000 votes tallied this week!

Jaclyn Carter, Hernando: Went 8-for-15 at the plate with three doubles and drove in seven runs in four Lady Tiger wins.

Kira Finkley, Grenada: Picked up three wins in three starts, allowing just one earned run in 19 innings of work and racking up 35 strikeouts.

Jaycee Holifield, Stringer: Went 8-for-10 at the plate with a double, a triple and six RBIs in back-to-back wins.

Avery Johnston, Vancleave: Got the complete-game, shut-out win in an extra-inning win over Lake, scattering five hits over eight innings with 12 strikeouts.

Izzy Martin, Pearl River Central: Went 7-for-16 at the plate with two home runs and three doubles, racking up 10 RBIs in a 3-1 week for the Lady Blue Devils.

Sydni Stevens, Ridgeland: Went 5-for-11 at the plate with two triples, driving in seven runs in three Lady Titan wins.