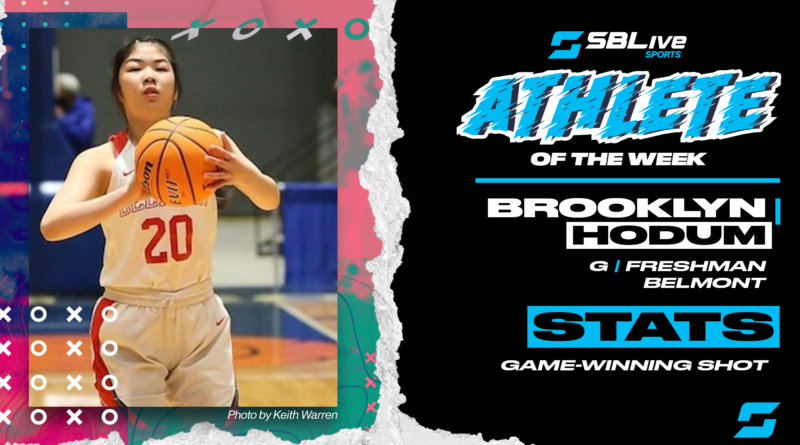 Hodum scored the game-winning layup with 13 seconds left in overtime to lift Belmont to a 66-65 win over Kossuth in the 3A girls state championship.

Hodum received 29.72% of the vote, beating out Laurel’s Mackenzie Thomas, who finished with 26.32%. Kossuth’s Zoe Essary finished third with 11.03% and Ingomar’s Macie Phifer was fourth with 8.44%.

Here are the other athletes who were nominated for March 1-7:

Rhema Pegues, Olive Branch: Pegues stepped up when Olive Branch needed her. The 5-foot-8 junior finished with 28 points and nine rebounds, despite picking up her fourth foul with 4:30 to go in the third quarter, to lead Olive Branch to a 66-62 win over Germanton in the 6A state championship.

Macie Walker, Belmont: Walker topped off a remarkable season with a game-high 29 points to lead Belmont to a 66-65 win over Kossuth in the 3A girls state championship.

Mackenzie Thomas, Laurel: Thomas scored nine points and was named the game’s MVP as she led Laurel to a 39-36 win over Holmes County Central in the 5A state title game – their first state title in girls basketball in school history.

Madison Booker, Germantown: The Lady Mavericks’ superstar sophomore poured in 25 points to go with 16 rebounds and dished out eight assists to help Germantown beat Harrison Central 65-32 in the 6A semifinals.

Zoe Essary, Kossuth: Essary led Kossuth with 20 points and 11 rebounds in their 66-65 loss to Belmont in the 3A girls state championship.

Quay Bailey, Calhoun City: Bailey had 14 points and 13 rebounds in Calhoun City’s 55-50 loss to New Site in the 2A state championship.

Ivy Loden, New Site: With the Lady Royals hanging on to a 53-50 lead late in the 2A state championship game, the 5-foot-4 Loden got a huge offensive rebound off a missed free throw, got fouled and buried her two free throws to put the game out of reach. Loden finished with 15 points.

Macie Phifer, Ingomar: The sensational 14-year-old scored 29 points and pulled down 13 rebounds to help Ingomar capture its fourth MHSAA 1A State Championship in six years with a 55-51 win over West Lowndes.

Addison Howell, Olive Branch: Howell poured in 22 points in Olive Branch’s 73-53 win over Meridian in the 6A state semifinals.