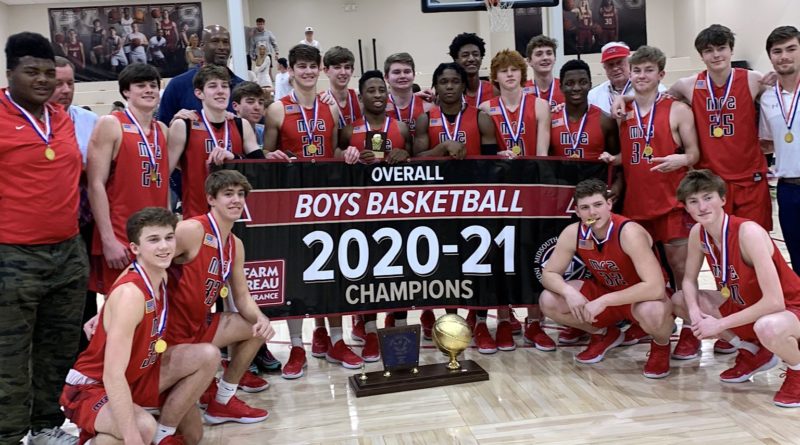 There were several in that category on Tuesday night in Madison-Ridgeland Academy’s 77-72 overtime win over Greenville Christian to claim the MAIS Boys Basketball Overall Tournament Championship at Hartfield Academy.

MRA’s Davis Dalton caught an airball shot from Harrison Alexander at the buzzer to tie the game at 66-66 and send the game to overtime.

The official called a technical foul on the GCS player, and after Smith missed both free throws for the foul, MRA’s Josh Hubbard made one-of-two free throws to make the score 66-64 Greenville Christian with two seconds left in regulation. Latham found Alexander on the ensuing inbounds pass for the potential game-winning three-pointer, and the shot fell straight to Dalton for the easy layup to tie the game.

“It wasn’t supposed to go to me,” Dalton said. “It was supposed to go to Hubbard on a screen, and I just happened to be under the goal and rolled to the basket and was able to put it back. It was pure luck, honestly.”

Dalton finished with 12 points for the Patriots.

“Davis Dalton is an athlete and went and got it,” said MRA coach Richard Duease. “Very pleased with the outcome and I told the guys going into overtime it was our time.”

MRA got free throws from Alexander and Hubbard to extend the lead to 74-68 with 28 seconds left.

After Smith hit another three-pointer with 20 seconds left to cut it to 74-72, Hughes hit a pair of free throws with 18 seconds to seal it to give MRA the win.

“The guys understand the heritage of our program and they weren’t going to let each other down,” Duease said. “Josh is a difference maker and a different player and stepped up big tonight.”

Hubbard finished with a game-high 36 points to lead MRA. He scored 27 points in the first half to give the Patriots a 40-27 lead at halftime.

“I was focused the whole day and came here with one goal to win,” Hubbard said. “It feels great winning this, but it’s time to get ready for next year.”

In the second half, Greenville Christian cut the lead down to 48-41 at the end of the third quarter.

In the final quarter the Saints took a 51-49 lead on a lay-up by Smith with six minutes left and led by as many as five points.

“You can’t come on the floor and that’s a rule,” said Greenville Christian coach Logan Collins. “These kids play with a lot of heart and we’re down 13 and the guys battled.”