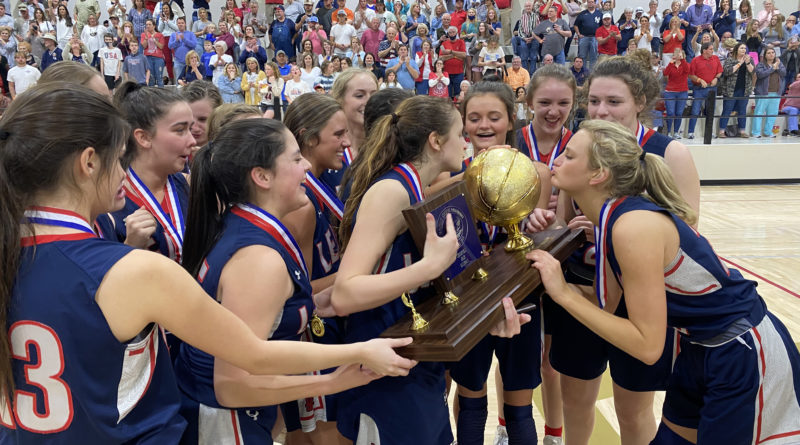 FLOWOOD — Emmi Harkins knew when she walked into the first day of practice for her senior year that Leake Academy had a chance to be very, very good.

They hadn’t won an MAIS Overall State Championship since 2009, but she had her fellow senior Mabry Mayfield and three sophomores who could really shoot the basketball.

On Tuesday night, Harkins scored 24 points to help the Lady Rebels to a 39-36 win over Hartfield Academy and the Overall Tournament Golden Ball trophy.

“It was my senior year, and we were going to this championship even if I had to drag us here all by myself,” she said, laughing. “I’m just glad it didn’t come to that.”

Harkins was everywhere. On a night when the rest of her team made just 4 of 28 shots from the floor, she made eight of her 20 attempts, including five 3-pointers.

And the Lady Rebels needed against the Lady Hawks, who were playing for the championship in their home gym against a team that had already beaten them three times this season, including an 82-45 whipping in their third meeting on Feb. 27.

Hartfield led for most of the first half before Leake Academy hit a three-pointer to tie the game at 15-15 just before the half.

The Lady Hawks even briefly tied the game at 36-36 with 33 seconds left, but Lady Rebel sophomore Miriam Prince made a couple of free throws, Harkins made another and a potential game-tying three-pointer from Hartfield came up short of the bucket.

The game was a nightmare scenario for Leake Academy, which had ridden the three-pointers to 36 wins before the overall championship game. They shot 32 more as a team Tuesday, and made just seven of them.

“It wasn’t pretty, but we’ll take it,” Leake Academy coach Amanda Hatch said. “We didn’t shoot very well at all tonight. You have to give credit to (Hartfield) because they did a good job of guarding the perimeter, but we made some adjustments in the second half and that helped open some things up.”

The big change was with personnel and working the ball inside and looking for the kick out rather than swinging it around the outside as much. The Lady Rebels shot 17.2 percent in the first half and 39 percent in the second.

“We knew they were going to do whatever it took to slow the game down because we like to play fast, fast, fast,” Harkins said. “And they did. Got to give them credit. We struggled with their zone and we couldn’t knock down all those shots we took, but we just had to settle down and we ended up making the shots we needed to make.”