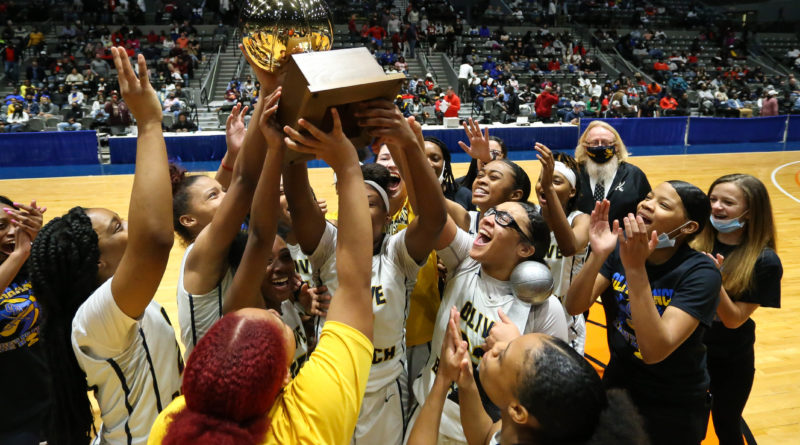 JACKSON — There are some March traditions everyone in the Magnolia State has grown to expect — the return of crawfish season, St. Paddy’s Day parades and some of the best weather we have all year.

Add Olive Branch winning a state title to the list.

The Lady Quistors captured their third state championship in a row Saturday, beating Germantown 66-62 in dramatic fashion in front of packed house at the Mississippi Coliseum.

Even though they led for practically the entire game, the final quarter was filled with drama. Germantown cut the Olive Branch lead to 62-61 with just under 30 seconds to play before game MVP Rhema Pegues slammed the door with a couple of free throws.

“I’m just glad it’s over with,” Olive Branch coach Jason Thompson said. “We didn’t have our best stuff, but hey, sometimes it works out like that. All I can say is to God goes the glory. Those kids laid it on the line and they brought it at the end. They made shots, made free throws and did what they had to do to stay ahead, and as long as we had the lead, I felt like we were going to be okay.”

The Lady Quistors jumped ahead 8-0 early in the game, but Germantown (14-4) finished the first quarter on an 11-4 run and trailed just 12-11 at the first break. Olive Branch stretched the lead back to 25-20 by halftime.

Olive Branch led by as many as 13 in the second half, but Germantown (14-4) rallied in the fourth quarter. Lady Maverick freshman Alana Rouser hit back-to-back buckets to pull the Lady Mavs within one at 62-61 with 28.8 seconds left on the clock.

But Olive Branch wasn’t going to be denied. Pegues drilled two free throws to put them ahead 64-61, and after the Mavericks went 1-for-2 at the line on the other end, Allison Howell put the game out of reach with two more free throws.

“(Pegues) was huge today,” Thompson said. “It’s a testament to that kid. She lives in the gym and she loves this game. She’s committed and sacrifices everything every single day to get better, and today was just a testament to how hard she works. She never leaves the gym. Today, you got to see what I’ve been seeing since August.”

It was the perfect ending to a dream season for Olive Branch (24-1), which had to go through Tupelo, Hernando, Madison Central and Meridian just to get here.

And just like in those other games, Pegues stepped up when Olive Branch needed her. The 5-foot-8 junior finished with 28 points and nine rebounds, despite picking up her fourth foul with 4:30 to go in the third quarter.

“I knew before I even got to high school that I wanted to win a state championship,” Pegues said. “To win one was amazing, to win two was even better. Now to win a third and be the MVP, I couldn’t have ever imagined it.”

And she isn’t done yet. Pegues said she’d allow herself a couple hours to celebrate, but that the training for next year starts tonight, not tomorrow.

“My father is a professional trainer,” she said. “So right after this, I’m going to take a few hours to enjoy this and get right back at it. There are no days off. The goal was four (titles) in four years, and I haven’t achieved that yet.”

(All photos by Randy J. Williams)