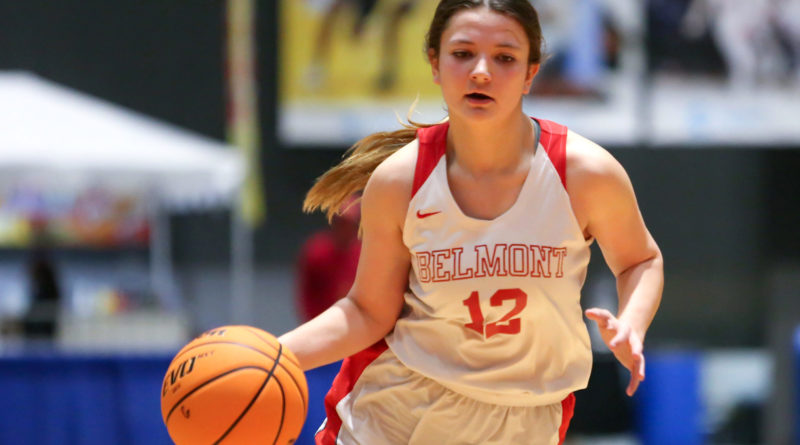 JACKSON — The drive from Belmont and Kossuth is just 49 miles on Hwy. 45, but the separation in talent when it comes to girls’ basketball couldn’t be closer.

So it was no surprise that Saturday’s 3A MHSAA Championship game came down to the final play in overtime, when Belmont’s Brooklyn Hodum hit a layup with 13 seconds left to lift the Lady Cardinals to their 12th state title in program history.

Trailing 55-54, Belmont’s star senior Macie Walker drove to the basket, but dished to Hodum at the last second to set up the wide-open shot.

“I was driving and was going to pull up, but it was going to be a very difficult shot to make,” Walker said. “I saw Sadie there, wide open, and got it to her. Part of winning a championship is trusting your teammates.”

Hodum didn’t disappoint, and it was just enough. Kossuth couldn’t convert on the other end — Bailey Holt missed a three-pointer from the corner and Hodum gathered the rebound as the buzzer sounded and the Lady Cardinals stormed the court for a dog-pile.

It was a fitting end to a fantastic game that nearly ended in regulation. Walker, who finished with 29 points and earned game MVP honors for her effort, had a chance to break a 46-46 tie. She got the ball on the in-bounds pass with two seconds left on the clock and had a clean look at a layup, but it rattled off the rim.

It was one of those shots that Walker, a University of North Alabama signee, makes nine out of 10 times.

“Everyone has a shot like that they want back forever,” Walker said. “I’m just glad it didn’t cost us the state championship.”

The Lady Cardinals (31-3) led for the entire first half. They hit a trio of three-point baskets early and kept Kossuth off the board in the first quarter to take a 9-0 lead into the second.

Kossuth woke up in the second quarter and put together a 16-7 run to tie the game at 16-16 with 3:40 left in the first half. Lady Cardinal sophomore Mary Grace Storment hit a couple of free throws to give Belmont the 18-16 edge at the half.

The Lady Aggies (21-6) took their first lead with a little more than a minute left in the third quarter when junior Zoe Essary drilled a 3-pointer to put them ahead 29-26. They led 32-31 headed into the fourth.

Essary led Kossuth with 20 points and 11 rebounds for the double-double. Kaitlyn Bonds added 15 points and Holt finished with 11. The Lady Aggies were seeking their second state championship in three years.

“We didn’t want to fall behind early and we did,” Kossuth coach Angie Malone said. “We did, but we fought through that and we battled and battled. It was just two great teams out there and someone had to lose. Unfortunately, it was us this time.”

The Championship was the first for Belmont since 2015, ending a five-year drought for one of Mississippi’s powerhouse girls programs. They lost in the 2019 championship game to this same Kossuth program.

“I remember that feeling,” Walker said. “All of this senior class does. That’s why we were determined not to feel that way again today.”