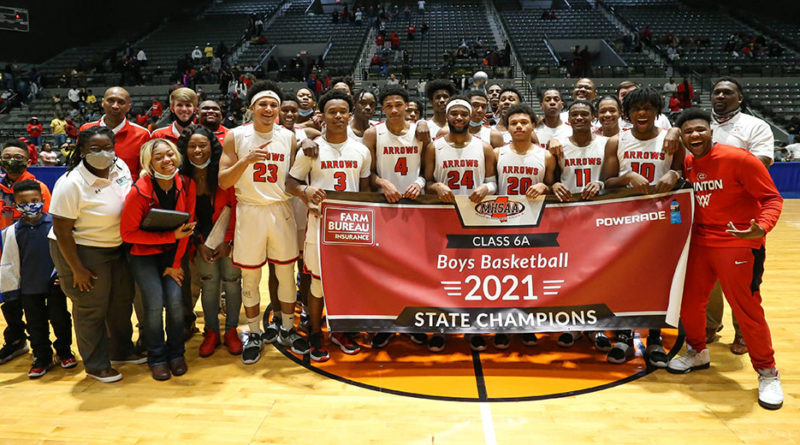 JACKSON — The 28-year drought is over.

Behind a strong fourth quarter from Allen Hughes and Kimani Hamilton, Clinton held off Starkville 56-51 to claim the MHSAA Boys Class 6A State Championship at the Mississippi Coliseum on Saturday night.

It is the Arrows (21-2) fourth state title in school history and first state title since 1993.

“Hughes really works hard on offense and defense. Tonight, he did that and made those free throws,” said Clinton coach Robert Green. “The last 12 months have been crazy and the year we had, but those young men grew up and we all believed in each other and they locked in and got the job done.”

It was a back and forth first half, with Starkville holding a 19-17 lead at the end of the first quarter and Clinton holding a razor-thin 30-29 lead at halftime.

Starkville came out and scored four quick points to take a 33-30 lead to start the second half. The Yellowjackets went ahead by as much as five points, at 41-36, late in the third quarter, but Hughes hit a three-pointer in the final seconds to cut the Jackets lead to 41-39 at the end of the quarter.

After Jarmarvious Phillips made a lay-up to put Starkville up 43-39, Clinton put together a 9-0 run — highlighted by back-to-back buckets from Hamilton — to take a 48-43 lead.

Starkville cut the lead down to two points at 52-50 on a three-point play by Eric Green with 24 seconds left in the game, but Hughes hit a couple of free throws with 12.8 seconds left to put Clinton up 54-50 and seal the game.

“We came in the locker room and talked about communicating through the screens and that got us back in the game to take the lead,” Hughes said. “Starkville wouldn’t go away and we knew we had to keep scoring. It feels great to do something that hasn’t been years at Clinton.”

Hamilton had 14 points and 14 rebounds for the Arrows and was named the games most valuable player. Clinton out-rebounded Starkville 38-28.

“Those rebounds were big because it would’ve kept them in the game,” Hamilton said. “Hughes showed when it was time. We had to come out and execute and get it done.”

Eric Green had 19 points to lead Starkville, while Phillips added 12 points for the Yellowjackets (21-3).

“The biggest key for us we had to win the rebounding and we didn’t,” said Starkville coach Greg Carter. “The basket-and-one for them gave them momentum and they kept it through the fourth quarter.”