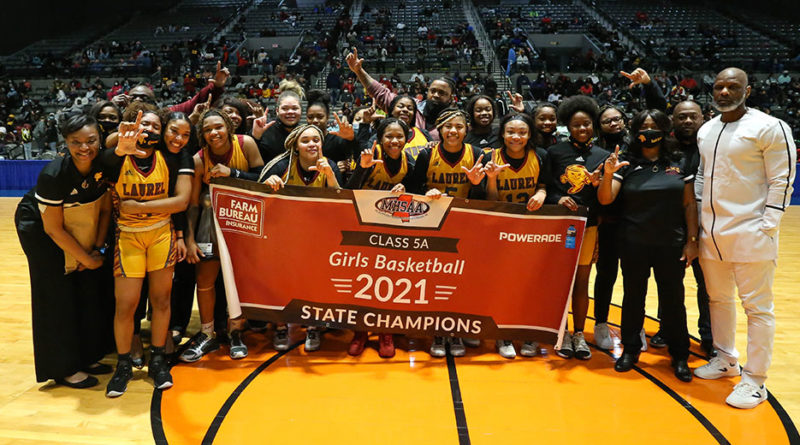 JACKSON — When Mackenzie Thomas transferred from Petal to Laurel, she said she didn’t know if she could play at a championship level.

As she held the MVP trophy following the Lady Tornadoes’ 39-36 victory over Holmes County Central in the MHSAA 5A Championship, she had found her answer.

Thomas scored nine points to lead the Tornadoes to their first state title in girls basketball in school history.

“I’ve been crying since the game ended,” Thomas said. “I’m sure there are some ugly photos of me coming out soon, but right now, I don’t care.”

The game came down to the wire, and Laurel hit the free throws when it mattered.

Kelsi Andrews drew a foul with 7.5 seconds left, but couldn’t make either of her free throws. That forced the Lady Jaguars to foul on the ensuing in-bound play, and Laurel’s Zoey Cooley knocked down both her free throws to give Laurel the 39-36 lead with three seconds left.

“I hate that she didn’t make those free throws,” Holmes County coach Luana Greer said. “But I’ll tell you this — she won’t miss them next time. I wouldn’t have wanted anyone else at the line in that situation. That’s the kind of player she is. She’ll use this experience to get better.”

Laurel never trailed in the game, but their largest lead was just seven points. They led 12-5 after one quarter and 19-16 at the halftime break, despite shooting just 23 percent (6 for 26).

They improved on that mark in the second half, making eight out of 20 shots. Thomas’s nine points were enough to lead all Laurel scorers. Cooley and Kassidy Ulmer both finished with eight. The Lady Tornadoes won the rebounding battle 32-23.

On the other side of the court, the Tornadoes played a defensive game and focused on slowing down Holmes County’s splendid duo Kelsi Andrews and her sister Carleigh Andrews. It worked — Kelsi finished with just two points and Carleigh had 11. They forced a whopping 23 Holmes County Central turnovers.

The Lady Jags shot the ball better in the second half than the first, but couldn’t get over the hump despite getting within one point of Laurel four times in the last 16 minutes.

“I will say this for (Holmes County) — they played hard like absolute dogs,” Thomas said after the game. “Credit to them for that. They fought us and fought us and wouldn’t go away.”