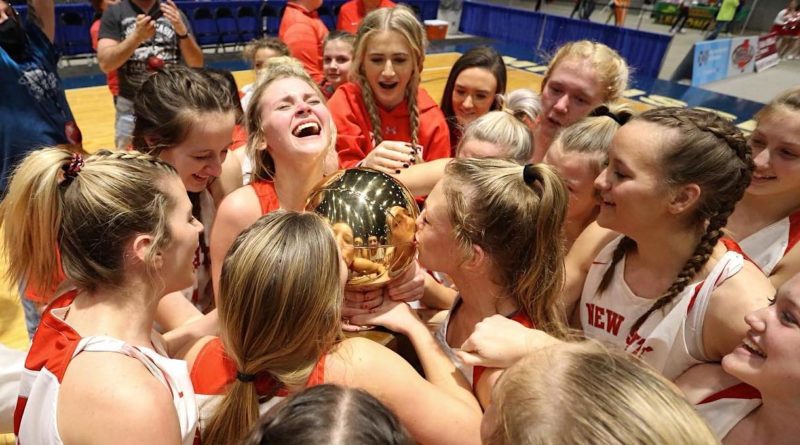 JACKSON — Hannah Campbell remembers well what it felt like three years ago when she and her New Site teammates walked out of the Mississippi Coliseum with tears in their eyes following a loss to Ingomar in the title game.

She was determined not to feel that way again Friday afternoon.

“I still can’t stop crying,” Campell said, laughing. “It’s just an unbelievable feeling I can’t describe, and especially to do this as a senior with this class. There’s no better way to go out.”

The Lady Royals (33-2) won Friday the same way they won so many games this season — with hustle.

Calhoun City’s Quay Bailey had at least a three-inch height advantage on every player on New Site’s roster and gave the Lady Royals problems the whole game. She grabbed 13 boards and was a big reason why Calhoun City won the rebounding battle 37-29.

But New Site got them when they needed them, and none was bigger than Ivy Loden’s offensive board following a free throw with 15 seconds left in the game.

With the Lady Royals hanging on to a 53-50 lead, Campbell drew a foul, but missed the front end of a 1-and-1. Loden, who is listed at 5-foot-4, stepped up and got the rebound right over 6-foot-1 Bailey. She buried her two free throws to put the game out of reach.

“When I was little, Jackson trips were everything,” said Loden, who finished with 15 points. “So on that rebound at the end, I knew we had to have it. Coach Sparks has emphasized rebounding and free throws at every single practice all season, so we knew how important it was in that moment.”

It was a fitting end to a great game with one of the best atmosphere’s of any game in the Mississippi Coliseum this week.

New Site hit three three-point baskets in the first quarter and led 18-12 at the first break. Calhoun City fell behind by eight points with 6:07 left in the second quarter, but fought back and trailed just 30-28 at the half.

New Site never trailed in the second half, but the Royals’ lead never hit double digits, either.

They took a 45-42 lead into the fourth quarter, and stretched it to 52-44 with three minutes to go. But there was no quit in Calhoun City — Bailey hit a layup with 80 seconds left in the game to cut the New Site lead to 52-50.

They were forced to foul Campbell following the bucket, which set up the final sequence with Loden’s rebound.

“We knew coming in that they were a great shooting team that was going to knock down some shots,” Calhoun City coach Rob Fox said. “We told the girls they just needed to weather the storm and come up with answers, and I was proud of the way we did that for most of the day. It was just a game of runs and they came up with the run at the end.”

Bailey finished with 14 points to get the double-double. Conley Langford scored 11 and Nashira Jennings chipped in 10.