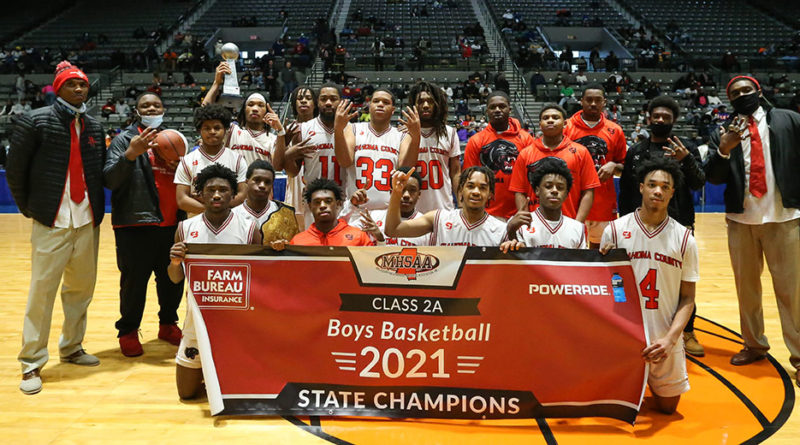 Behind a stingy defense and the play of Tylin Martin, Coahoma County got past Newton 46-40 to claim the MHSAA Boys Class 2A State Championship for the second straight season on Friday afternoon at the Mississippi Coliseum.

It is the Panthers (9-2) fourth Class 2A state title in the last five years and their sixth state championship overall.

“We had one guy that was used to this stage and everyone else was new,” said Coahoma County coach Derrick Moore. “We only played 11 games this season with new guys and didn’t have time to gel together.”

In a defensive battle that featured a combined 51 turnovers, Coahoma County jumped out to a 13-6 lead at the end of the first quarter. Midway through the second quarter Newton went on a 12-0 run to take a 22-15 lead.

The Panthers came right back, ending the first half on a 9-0 run highlighted by the sharp-shooting of Christopher Abby to take a 24-22 lead at halftime.

“Our message was they can only beat us in two places – rebounding and press,” Moore said. “If we can clean up that press we were going to have the advantage. We had to settle down and slow down because they want to go fast.”

In the third quarter both teams combined to make three field goals. Coahoma County held a 32-27 lead heading into the fourth quarter.

The Panthers started the fourth quarter on an 8-2 run to extend their lead to 40-29. In the final minute of the game Newton made a run, cutting the final margin down to six points.

Martin scored a game-high 16 points to lead Coahoma County and was named the game’s most valuable player.

“Coach told us it was our last game and we had to do what we had to do,” Martin said. “The second half we came out and spaced the floor more. We play as a team and we will be back again next year.”

“We could never get our tempo going and shots wouldn’t fall,” said Newton coach Crandle Porter. “Coahoma County has been here before and it seemed at times the moment was too big for us.”