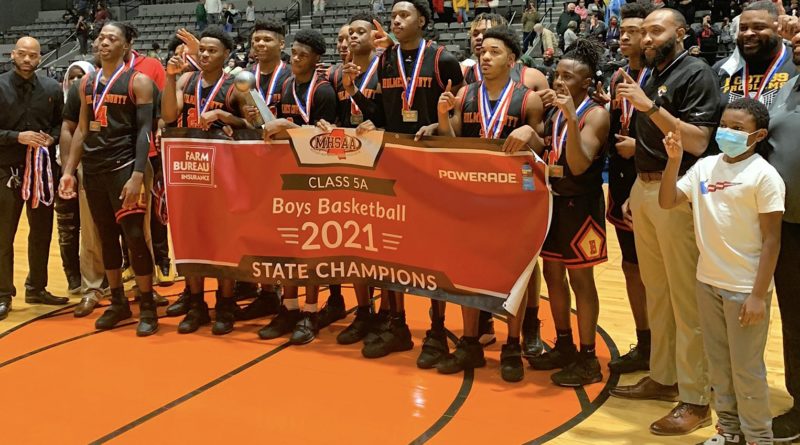 JACKSON — History has been made.

Behind a stellar third quarter and the play of Amarion Hoggan, Holmes County Central got past Lake Cormorant 64-58 to claim the 2021 MHSAA Boys Class 5A State Championship on Friday night at the Mississippi Coliseum.

It is the Jaguars (22-8) first state title in school history.

“First time coming to the Coliseum and they showed up and showed out. We made adjustments and attacked,” said Holmes County Central coach Deangelo Priar. “It was a long year due to Covid. We started out slow but when district play started we managed to put it together. The guys bought in to what I was teaching and when the playoffs started they were locked in.”

In a tightly contested game, Holmes County Central held a slim 12-11 lead at the end of the first quarter.

With Holmes County up 22-16 midway through the second quarter, Lake Cormorant went on a 9-3 run to tie the game at 25-25 at halftime.

The Jaguars started to create separation in the third quarter, rattling off a 9-2 run to take a 34-27 lead.

The Jaguars outscored the Gators 24-12 in the third quarter and held a 49-37 lead heading to the fourth quarter.

“When the defense goes up the offense goes up as well,” Priar said. “Amarion Hoggan came through and made plays. The third quarter we played really well on both ends of the floor. It means a lot to win it my first year as head coach. And we have talented kids, they were just young, so I and Coach Patrick put the kids in the best situation to win.”

Lake Cormorant cut the lead down to six points on two different occasions in the final quarter, and eventually got within two at 60-58 with just under a minute left on a lay-up by Donovan Sanders.

But Holmes County made four out of five free throws to seal the victory.

Hoggan had 17 points to lead the Jaguars and was named the game’s most valuable player.

“They got out of their zone defense in the second half and we were able to drive to the goal and make shots,” Hoggan said. “This is the first state title in school history and I’m so excited for this team.”

Quashon Rowe added 15 points for Holmes County Central, while Louzavious Thomas chipped in 12 points and Malik Crigler had 11 points for the Jaguars.

Keithan Brooks and Sanders each had 17 points to lead Lake Cormorant. The Gators finish the season 20-8.