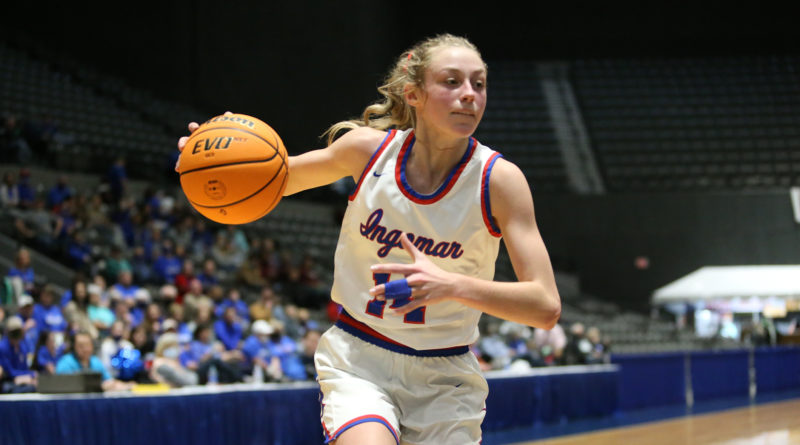 Ingomar’s Macie Phifer is not like most eighth graders.

The sensational 14-year-old scored 29 points and pulled down 13 rebounds to help Ingomar capture its fourth MHSAA 1A State Championship in six years with a 55-51 win over West Lowndes Thursday afternoon at the Mississippi Coliseum.

“This is what I’ve dreamed about my whole life,” Phifer said. “And to come out here today and actually do it, it’s amazing and so rewarding.”

Phifer hit just about every big shot for Ingomar (23-9) down the stretch in what turned into an extremely tight game at the end.

Early on, it looked like it was going to be a blowout. Phifer, Lindsey Dillard and Katie Beth Hall all hit three-point baskets in the first quarter for Ingomar, as the Lady Falcons built a 13-6 lead by the first break.

But West Lowndes fought back. Senior captain Averi Sanders hit a couple of 3-pointers and Tydajasha Hood hit a couple of layups to cut the Ingomar lead to 31-24 by halftime.

The Lady Panthers (19-6) continued to close the gap after the break. They finally tied the game at 40-40 on a couple of free throws from Hood to close the third quarter.

“After the third quarter, I asked the girls ‘What more could you want?’” Ingomar coach Trent Adair said. “It’s 40-40 going into the fourth quarter, you have a chance to win the championship, now go win it.”

And win it they did. The lead went back and forth until the two-minute mark in the fourth quarter, when Phifer and Hall hit back-to-back 3-pointers to break a tie and give Ingomar the 53-47 lead.

West Lowndes responded by making one free throw before Sanders hit a huge three-pointer to cut Ingomar’s lead to 53-51 with 10 seconds left.

Luckily for the Ingomar faithful, Lady Falcons coach Trent Adair had the perfect play. Coming out of a timeout, they used a little misdirection and Hall hit Phifer in stride with a bounce pass for the easy, uncontested layup, giving Ingomar the bullet-proof, four-point lead with about 3.5 seconds left. A futile 3-pointer from Sanders missed the mark as the buzzer sounded and the rest of the Lady Falcons stormed the court in celebration.

The Lady Falcons shot 39 percent from the floor, making 16 of their 40 shot attempts. Hall finished with 16 points, including four 3-pointers. Phifer was named the game’s MVP for her efforts. Both played all 32 minutes without coming off the floor.

“I don’t think she’s come to the realization — nor should she have at this point, having just turned 14 — of how good she can be,” Adair said of Phifer. “She’s a difference maker.”

The loss ended a magical run for West Lowndes. The Lady Panthers had won 12-straight games coming into Thursday, including a dramatic 44-40 win over a very good Biggersville team in the semifinal round.