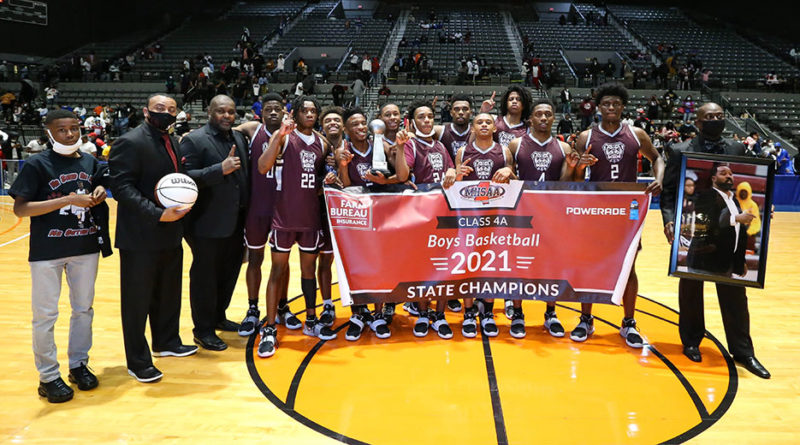 JACKSON — The Maple Street magic is back.

Thanks to a big second quarter Lanier was able to get past Region 6-4A rival Raymond 64-48 to claim the MHSAA Boys Class 4A State Championship at the Mississippi Coliseum on Thursday night.

It was the Bulldogs’ 17th state title in school history and the first since 2007. Lanier (18-4) ended the season on a 16-game winning streak.

“When you work hard and play hard, this is the result you get,” Lanier interim coach Rafael Anderson said. “These guys stayed focused and stayed the course and bought into what we’re doing and it showed tonight. We just stuck to the task at hand and attacked the basket and came out victorious.”

The second quarter is when the Bulldogs started to take control, as they put together a 16-0 run midway through the quarter to take a 33-14 lead. Lanier held a 36-19 lead at halftime.

In the third quarter, the Bulldogs answered every Raymond bucket in turn. They held a 54-36 lead heading to the fourth quarter.

The Rangers opened the fourth quarter with an 8-2 run to cut the Lanier lead to 56-44, but Shamar Moffett banged home a three-pointer from the corner to expand the Bulldog lead back to 59-44 and they held on from there.

When it was over, the team stormed the court and rallied around a large, framed photo of Lanier coach Lawrence Clark, who remains in the hospital fighting pneumonia. Anderson and his fellow assistant Ronald Cox handled coaching duties for the entire post-season.

“This group is a brotherhood and enjoy being around each other and they had each others back and did that tonight,” Anderson said. “We got guys that attack the rim and we were able to do that. It’s been a while since a gold ball came back to Lanier, so we had to bring it back.”

Michael Brown had 14 points to lead Lanier. Sacario Hamilton and Damaurian Edwards each added 11 points for the Bulldogs.

Edwards, who hit the overtime game-winner in Monday’s semifinal win over Pontotoc, was named the game’s most valuable player.

“At times I had good opportunity to score and I did,” Edwards said. “This a team win and we all did what we had to do. I’ve been here three years and this team is a brotherhood and we played together.”

Edwards added that he planned to put the MVP trophy on his mama’s kitchen table.

Jabarie Robinson had a game-high 21 points to lead Raymond (22-6). The Rangers lost in the state title game for the second year in a row after winning the championship in 2018 and 2019.

“They came out and shot the ball really well tonight,” said Raymond coach Tony Tadlock. “They beat us on the glass tonight and that was something we couldn’t afford to have happen. You just have to give them credit. They deserved the win tonight, but I can promise you we will be back.”

Tadlock added that he counts Lanier’s ailing coach among his friends, and was inspired by the way the Bulldogs played in his absence.