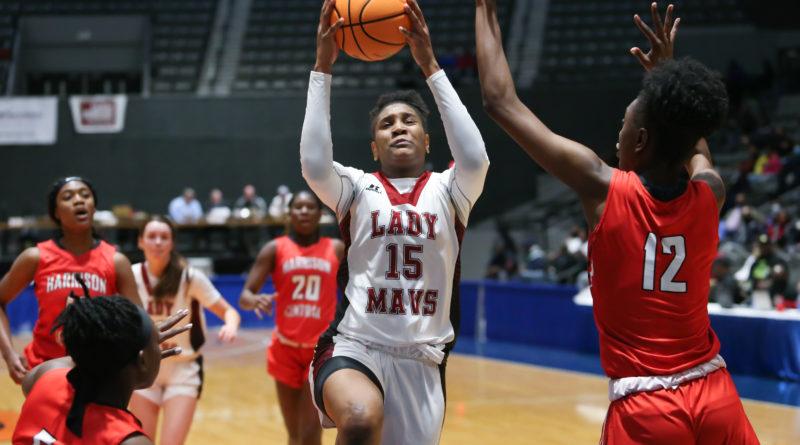 JACKSON — There have been some dominant performances at the Mississippi Coliseum at this week’s MHSAA Basketball Tournament, but Germantown’s Madison Booker raised the bar Wednesday night.

The Lady Mavericks’ superstar sophomore poured in 25 points to go with 16 rebounds and dished our eight assists to help Germantown advance to Saturday’s 6A State Championship with a 65-32 win over Harrison Central.

“She puts in the work,” Germantown coach Jamie Glasgow said. “We never tell our girls ‘no’ when they want to put in extra work in the gym, and we’ve stayed hours late sometimes. She and Alana Rouser play like that for a reason.”

The Mavericks trailed 9-8 after one quarter, but out-scored the Red Rebelettes 10-6 in the second quarter to take an 18-15 lead into the halftime break.

“We played a team game in the first half,” Booker said. “And we played great defense, so we had the three-point lead. But in the second half, I felt like I needed to take over the game.”

Booker was everywhere. She commanded double and triple teams from the Harrison Central defenders, which freed up wide open teammates for outlet passes when she drove the bucket. She would have had a triple-double if not for missed shots following potential assists.

“Our defense has been good in the post-season,” Glasgow said. “We know we can score, but it’s our defense that’s gotten us to this point where we are playing for a state championship.”