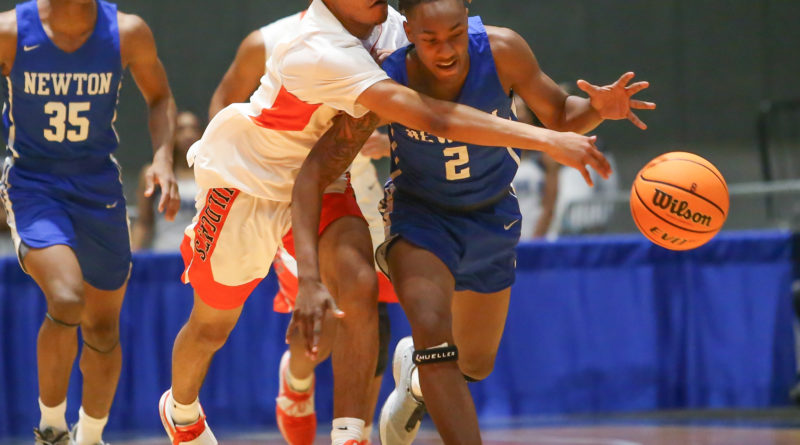 JACKSON — The drought is over.

Behind a sharp-shooting performance from Justin Thompson and stingy defense Newton ran past Calhoun City 77-42 in the semifinal round of the MHSAA Boys Class 2A playoffs at the Mississippi Coliseum on Tuesday afternoon.

The Tigers (15-4) will face Coahoma County for the Class 2A State Championship on Friday at 3 p.m. Newton is in the state championship game for the first time since 2008.

Coahoma County has won the 2A state title three times in the last four years, including last season.

“Real happy for the kids for buying in to what we’re teaching them and working hard in what has been a tough year for everyone,” said Newton coach Crandle Porter. “Justin comes into the gym every night and takes a lot of shots. Tonight, it was good to see his shots go in.”

The Tigers raced out to an 11-2 lead to begin the first quarter. Calhoun City ended the quarter on a 9-2 run to cut the Newton lead to 13-11 at the end of one.

To begin the second quarter the Tigers started to run away as they opened the quarter on a 14-2 run to extend their lead to 27-13.

Newton outscored Calhoun City 23-7 in the second quarter to take a 36-18 lead at halftime.

The Tigers poured it on in the third quarter, out-pacing the Wildcats 25-12 to go up 61-30 heading into the fourth quarter.

The Newton 2-2-1 press defense forced Calhoun City to turn the ball over 26 times.

“We want to be well balanced, get everyone involved and not be one-dimensional,” Porter said. “Part of the game we want to wear people down with our depth and defense. We were able to do that tonight. Coahoma County is no stranger to this stage, so we have to go get prepared.”

Thompson scored a game-high 20 points to lead Newton. He was 5-for-10 from three-point range. Rayvion Nettles added 12 points, while Cahden Thompson had 10 points for the Tigers.

“I made my first shot and just felt it, so I just kept shooting,” Thompson said. “We are a defensive team and let the offense come to us. We play together as a team, so we keep believing in each other so we believe we can do it.”

Zack Armstrong had 10 points to lead Calhoun City. The Wildcats finish the season 16-13.

“It was a Cinderella season for us. The guys started to play together at the right time and we made it here,” said Calhoun City coach Daren Coffey. “Newton did a really good job wearing us down and their defense gave us problems.”