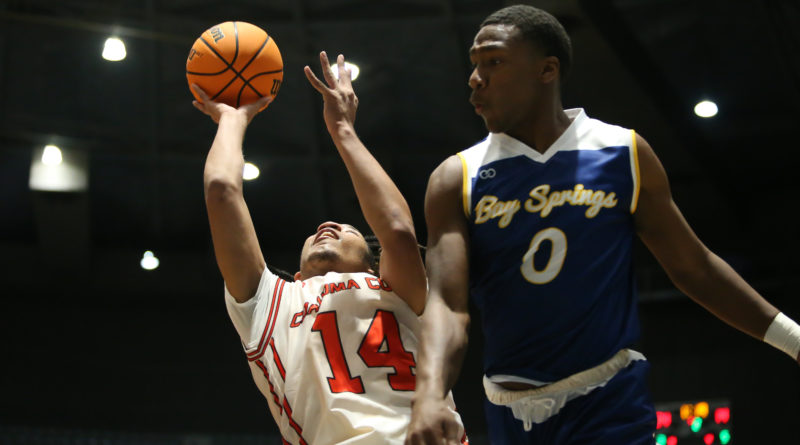 JACKSON — The Coahoma County Panthers knew two truths headed into Tuesday’s 2A semifinal — one, that they were going to have to get by undefeated Bay Springs if they wanted to repeat as 2A State Champs and two, that was a lot easier said than done.

It took overtime, but coach Derrick Moore’s squad got it done, handing the Bulldogs their first loss of the season with a 70-61 win that advances them to Friday’s 3 p.m. 2A State title game against or Newton.

“We knew we were in for a fight against them,” Coahoma senior guard Jermell Daniels said. “They were 25-0, so we knew what to expect. We just have to stay with it and fight to the end.”

And that’s exactly what they did.

The Panthers (8-2) had several chances to put the game away in regulation, but Bay Springs just wouldn’t go away. Coahoma County held an 11-point lead — 27-16 — at halftime, but the Bulldogs (25-1) scored 13 unanswered to start the second half to get back in it. The two teams traded leads in the third quarter a couple of times, but Coahoma County took control early in the fourth quarter.

They led by six, 52-46 with 1:13 left in regulation. That’s when the wild back-and-forth started. The Bulldogs got a quick bucket and fouled immediately on the inbounds pass. They got another quick bucket after Coahoma missed both free throws, which cut it to 52-50 with 58.9 seconds left. And so it went, with both teams trading free throws until finally Bay Springs got to the charity stripe for two shots, trailing by one point, 55-54 with 3.5 seconds left on the clock.

Junior Chad Jones hit the first free throw to tie the game, but the second was long and bounced high off the back of the rim. The Bulldogs missed a desperate three-pointer after a quick turnover, which sent the game to overtime.

It was all Calhoun City in the extra period. The Panthers jumped out to a 61-55 lead and never looked back.

“We had our chances to win the game,” Bay Springs coach Randall Mackey said. “We had our best free throw shooter at the line with a chance to get the lead. I just hate it didn’t go down for the kid, but I couldn’t be prouder of the way we fought back. I think we just lost our confidence headed into the overtime when we didn’t win it in regulation.”