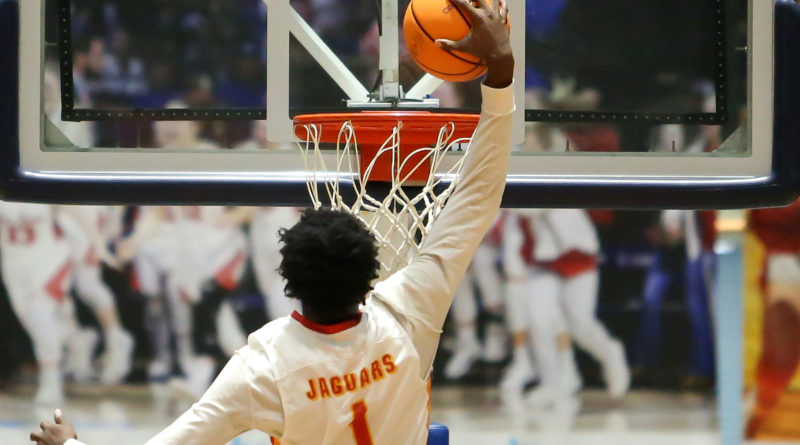 JACKSON — The duo of Amarion Hoggan and Louzavious Thomas just couldn’t be stopped in the second half.

The two juniors combined for 29 of Holmes County Central’s 32 points in the second half as the Jaguars rallied past Forest Hill 62-57 in the semifinal round of the MHSAA Boys Class 5A Playoffs at the Mississippi Coliseum Tuesday night.

“We started off slow because we’ve never played in the Coliseum, so it was all about finishing the game,” said first-year head coach DeAngelo Priar. “Second half, we’ve always come out with intensity and the guys came out with energy tonight. Amarion came through attacking the rim, made free throws and sealed it for us.”

It appeared, early on, like Forest Hill was going to run away with the game. The Patriots looked convincing in the first quarter, racing out to a 21-9 lead. But Holmes County picked up the tempo in the second quarter. They started attacking the basket and out-scored Forest Hill 21-13 to cut the Patriot lead to 34-30 at halftime.

The Patriots answered every Holmes County advance in the third quarter — responding to buckets in kind — and grew their lead to five at 48-43 headed into the fourth, where the dam finally broke for the Patriot defense.

The Jaguars rattled off a 13-2 run — highlighted by a 3-point play by Hoggan — to open the quarter and took a 56-50 lead they never gave back.

“Coach just told us to keep fighting. At first we were turning the ball over, couldn’t get to the goal but I had to step up in the second half and I did,” Hoggan said. “We kept rushing shots and coach told me to slow down and when I did shots were going.”

Thomas had 21 points to lead the Jaguars. Quashon Rowe chipped in 10 points.

“We ran through the press in the first half, but we weren’t making shots,” Thomas said. “Then we came out with a lot of energy in the second half and kept the momentum the rest of the game.”

Jayme Mitchell had a game-high 22 points to lead Forest Hill. The Patriots finished the season 21-2.