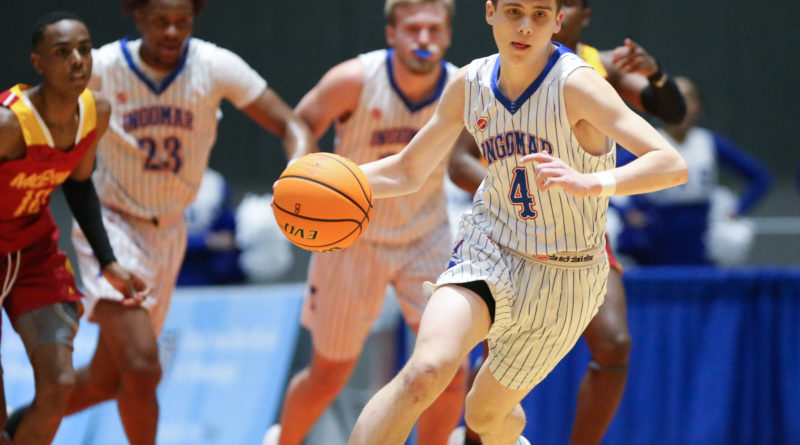 JACKSON — The Falcons are headed back to the state championship game.

Behind the play of Adin Johnson, Tyson Smithey and Zach Shugars, Ingomar raced past McEvans 64-50 in the semifinal round of the MHSAA Boys Class 1A playoffs on Monday afternoon at the Mississippi Coliseum.

The Falcons (29-5) will face Biggersville for the Class 1A State Championship on Thursday afternoon at 1 p.m.

“We did a better job in the third quarter with defending without fouling and made some shots,” said Ingomar coach Jonathan Ashley. “I told the guys at halftime that necessity is the mother of all inventions, so we couldn’t stop them on penetration, and we switched to the 2-3 zone and we got stops.”

In the second quarter, McEvans cut the lead down to 19-11, but the Falcons extended their lead back to 26-13 midway through the quarter. The Warriors ended the first half on a 13-3 run to cut the Ingomar lead to 29-26 lead at halftime.

“We kept fouling and they were making free throws and that’s what was killing us,” Ashley said. “Proud of the guys for stepping up in the second half.”

In the third quarter Ingomar increased their lead to 37-30 midway through and ended the third period on a 9-0 run to extend the lead to 46-32. The Falcons opened the fourth on a 9-4 run to go up 55-36 and sealed the game from that point.

Johnson had a game-high 19 points to lead Ingomar. Smithey added 14 points, while Shugars had 13 points for the Falcons.

“We knew they were going to be aggressive and quick, so I had to get in the middle and work,” Smithey said. “We had to attack the offensive glass and use our size to our advantage. In the third quarter we blocked out a lot better and played better defensively. Now we get to move on to play for a state championship, and we’re excited about it.”

Jelani Jackson had 14 points to lead McEvans, while Omarion Blakes added 10 points for the Warriors (13-4).