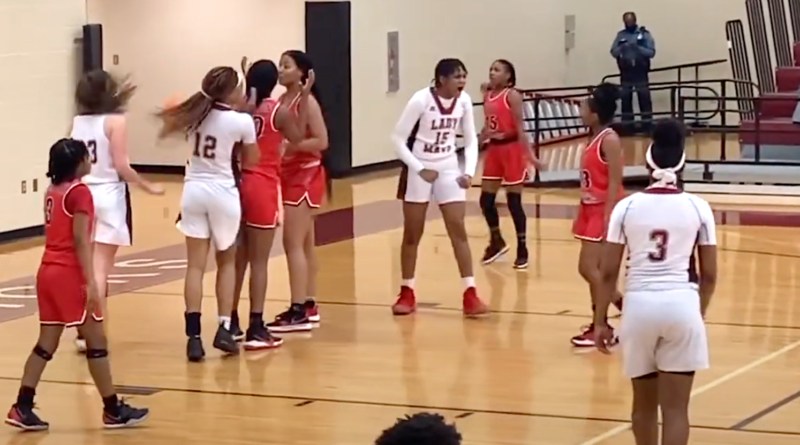 MADISON — It wasn’t pretty, but Germantown didn’t need it to be.

Behind the steady hand of sure-fire All-State forward Madison Booker, the Lady Mavericks handled business in the second round of the MHSAA 6A Girls Basketball State Tournament, beating Clinton 50-39.

Germantown (12-3) will face either Oxford or Tupelo in the third round Friday night.

Booker was pretty much amazing. She scored 13 of her 21 points in the second half and dominated on the boards, despite showing serious signs of fatigue after a long layoff due to last week’s ice storm.

“I’m tired,” Booker said after sitting on the court for a good 10 minutes after the game had concluded. “This was a physical game, but we wanted it more. The layoff was kind of tough because you don’t get to be in the gym and stay ready, but thankfully we were able to overcome that and fight through.”

It was a good game early on in the contest. Germantown raced to an 8-2 lead to start, but Clinton closed the gap in the final minutes of the opening quarter and went into the first break with an 8-8 tie.

After a scoreless first quarter, Booker chipped in eight points in the second. That helped to fuel a 12-4 run to open the quarter, and gave Germantown some much-needed cushion against the feisty Arrows (13-5).

They went into the half trailing 23-17, but Clinton fought back in the third quarter. They opened the second half with a 10-5 run to cut the Germantown lead to one (28-27), and wound up out-scoring the Lady Mavs 15-14 in the quarter.

But Germantown flexed its muscles in the fourth quarter. Booker poured in nine more points, Alana Rouser hit all eight of her free throws and the Maverick defense limited Clinton to just nine points total.

“I was proud of the way we fought through some adversity there,” Germantown coach Jamie Glasgow said. “We haven’t played in nearly two weeks because of the ice storm and being out, so we were a little rusty. They kind of put a little box-and-one on us and we were kind of out of sorts for a little bit but we finally started getting it together. As long as we play good defense, we have a chance to win the ballgame, and we did that tonight.”

Both Booker and guard Reagan Jordan went down with injuries in the fourth quarter. Booker had to go to the bench for a couple of minutes to stretch out a cramp, but returned. Jordan went down hard on a drive to the basket and hit the back of her head hard on the court. Glasgow said Wednesday that her status for Friday’s second-round game would not be determined until Thursday.

“She hit her head really hard,” Glasgow said. “We’ll just have to see how she feels tomorrow and we’ll go from there.”

The loss snapped a six-game winning streak for the Lady Arrows. Taelar Felton and Kaitlyn Walker paced Clinton with 15 and 14 points, respectively.

Coach Pearlene Fairley said she was proud of the way her team competed, especially considering Germantown had beaten Clinton 65-37 in an earlier meeting on Jan. 12.

“We had a game plan, went with it and did our job,” Fairley said. “Most of their points came from free throws, and they shot 25 of them. That’s the story of the whole game. They went to the line 25 times and made 19 of them.”