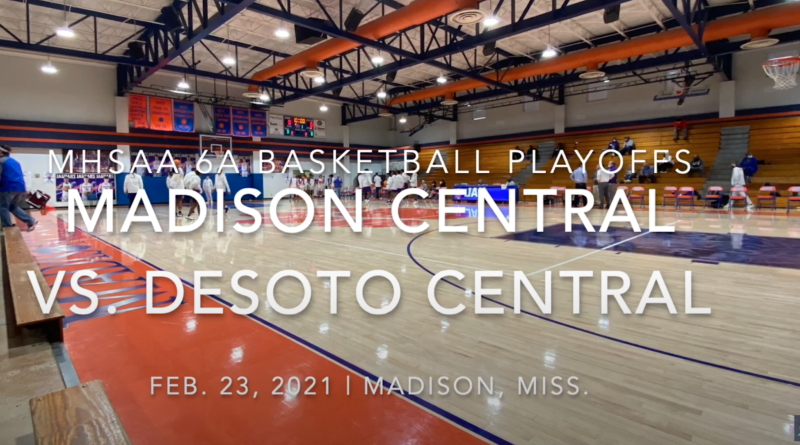 MADISON — Madison Central is a team that went though some growing pains and cold shooting streaks over the course of the season, but that team was nowhere to be found Tuesday night in the Jungle.

The Jags whipped DeSoto Central 68-46 behind some solid defense and the hot hand of sharpshooters Tom Lee and Caleb Kent to advance to the second round of the MHSAA 6A Boys Basketball State Tournament.

“We looked like a good basketball team again tonight,” Madison Central coach Timothy Speech said. “When Tom Lee and Ryan Cofield are shooting as well as they did tonight, we are very tough to defend.”

That was certainly the case for DeSoto Central (14-12) Tuesday.

The Jags got off to a slow start offensively, with just 15 points in the first quarter, but played fantastic defense and led 15-9 at the first break. That solid defensive effort continued in the second quarter, with Madison Central (8-13) forcing four turnovers and big, 6-foot-9 center Shane Davis blocking a couple of shots.

DeSoto Central’s Matthew Smith hit a 3-point basket to open the final period, which cut the Madison Central lead to 10 (47-37), but Lee drilled another long shot from the corner to stretch the lead back to 13. It snowballed from there.

“It was a good night,” Lee said. “My teammates set me up in some good spots, which gave us some good shots, and we were able to knock them down. The defense was big for us early. We were able to get some stops and then some buckets on the other end, and that really helped us build that lead.”

Next up for the Jaguars is a trip to Starkville to face the Yellowjackets (16-2) in the second round. It’ll be the first time the two teams have met this season.