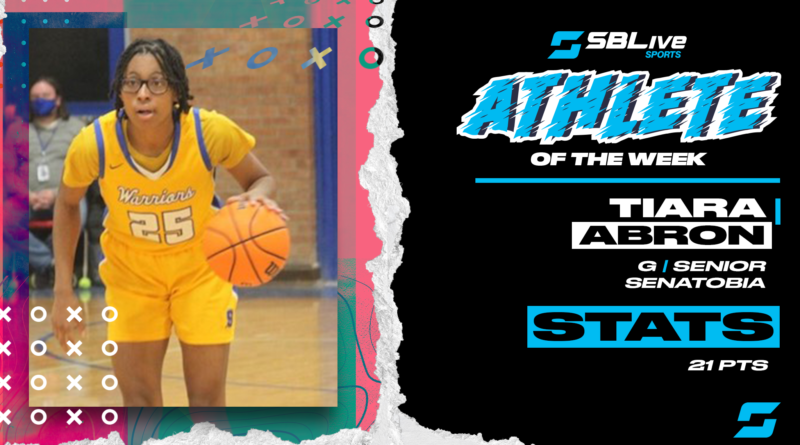 Abron scored 20 points in Senatobia’s 74-20 win over North Panola. The senior also had 22 points in the Warriors’ loss to Independence in the Region 2-3A Championship game.

Abron received 32.7% of the vote, beating out Independence’s Kanyiah Walker, who finished with 26.79%. Lewisburg’s Allie Carroll finished third with 7.76% and Pillow Academy’s Caroline Brock was fourth with 6.19%. There were over 99,000 votes tallied this week!

Samya Brooks, Pontotoc: Brooks scored 20 points to lead Pontotoc to a 60-49 win over Shannon in the Region 2-4A Championship.

Lamarah Cleaves, Tupelo: Cleaves led Tupelo with 16 points in their 61-57 loss to Olive Branch in the Region 1-6A Championship.

Simaru Fields, Gulfport: Fields exploded for 35 points to lift Gulfport to a 64-57 win over Harrison Central in the Region 8-6A Championship.

Janiah Hinton, Saltillo: Hinton scored 14 points and grabbed 5 rebounds to lead Saltillo to a 36-26 win over Lafayette in the Region 1-5A Championship.

Addison Howell, Olive Branch: Howell scored 23 points – including 14 in the second half – to lead Olive Branch to a 61-57 win over Tupelo in the Region 1-6A Championship.

Janiya Jones, DeSoto Central: Jones scored 17 points to lead DeSoto to a 56-44 win over Lewisburg in the Region 1-6A consolation game.

Tandria Minor, Brandon: Minor was named the Region 6-6A MVP after leading Brandon to the Region Championship.

Kayleigh Prentiss, Center Hill: Prentiss scored 23 points to lead Center Hill to a 66-47 win over Lake Cormorant in the Region 1-5A consolation game.

Mia Wheeler, Hartfield: The senior averaged a double-double of 13 points and 10 rebounds for the Lady Hawks in games played against Oak Forest, Central Hinds, and Hillcrest Christian.