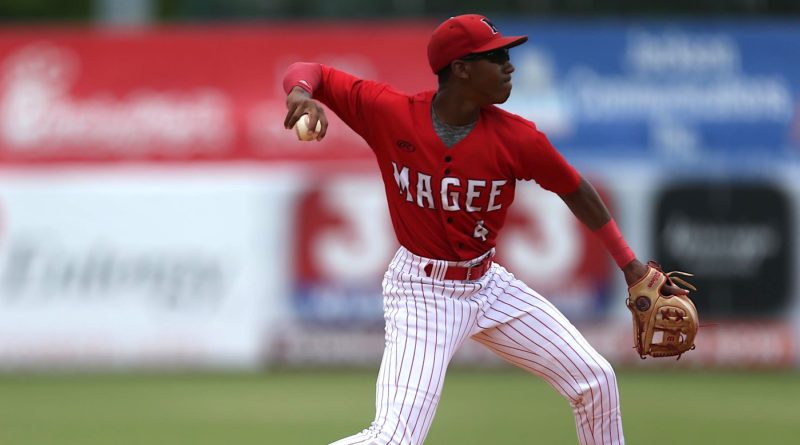 With the Mississippi high school baseball season officially underway, SBLive is taking a closer look a the Top 30 baseball players to watch for the Magnolia State’s senior class.

Lewisburg’s 6-foot, 200-pound catcher plays as solid defense as you could hope for behind the plate and proved a capable hitter from the right side in his last full season — he knocked in 31 runs in 30 games as a sophomore. Bane signed with Mississippi State in November.

At 6-foot-2 and 180 pounds, Cayden Bridges is built like a football player because … well, he is one. Magee’s star receiver and defensive back signed a football scholarship to play at Auburn, but likely would have had his pick of college baseball programs if he had decided to go that route. He plays a solid middle infield and hits for both power and average.

Buckley would probably make our list as an infielder, but the 5-foot-10, 190-pound senior has a plus fastball that tops out in the low 90’s and good breaking ball. He’s committed to Northwest Miss. Community College.

Seth Carter gets the most out of his 5-foot-11 frame, throwing from the right side. His fastball is consistently in the upper 80’s and he’s a good hitter. Carter has not made a commitment on where he’ll play ball next year.

At 6-foot-5 and 200 pounds, the right-hander has a great combination of control and velocity that has had him on scouts’ radars since last season. Conn is committed to Mississippi State.

Crumpton has big upside at 6-foot-3 and 190 pounds at more than one position. He projects as a solid defensive option at third base or shortstop and tops out in the low 90’s on the mound. He signed with Ole Miss in December.

Everyone should know his name from football, but George County’s M.J. Daniels may be just as good on the diamond. He’s got great size at 6-foot-3 and 175 pounds and has some pop from the right side of the plate. He really shines defensively in the outfield, with the speed and athleticism to track down just about anything. Daniels signed with Ole Miss in December and will reportedly play both football and baseball for the Rebels.

Downs has played all over the place — and well — defensively, but has been as consistent a hitter as you could hope for through his high school career. At 5-foot-11 and 205 pounds, he has good size and speed for a middle infielder. He wa originally committed to Louisville, but flipped to Mississippi State late last year.

Elliot is the top-rated left-hander in the 2021 class at 6-foot-3 and 205 pounds. He’s got a fastball that tops out in the low 90’s, a good changeup and a supplementary breaking ball. He was a long-time commit when he signed with Ole Miss during the early signing period in November.

Germantown ace Bryce Fowler probably would have had a breakout season last year if not for the virus. The 6-foot-1, 175-pound left hander has a good fastball that tops out in the low 90’s with a good changeup and a wicked breaking ball. He inked with Southern Miss during the early signing period.

At 6-foot-4 and 230 pounds, Madison Central’s star third-baseman and catcher Hunter Hines is one of the more imposing hitters in the state and he’s a lefty. The Jags’ biggest power hitter committed to Mississippi State.

Holiday got a lot of attention in the fall for his football prowess — he racked up more than 4,000 total yards and 67 touchdowns as the TCHS quarterback — but the 5-foot-9, 150 pound athlete doubles as an excellent middle infielder as well. He signed to play both sports for Northeast Miss. Community College last month.

Jackson Prep’s splendid shortstop gets on base like clockwork. He’s six feet tall and 170 pounds with solid defensive skills and great contact from both sides of the plate. He signed with Mississippi State in December.

Ole Miss commit Brayden Jones fits a ton of athleticism into his 6-foot, 185-pounds frame. He’s got a good fastball that tops out in the low 90’s and has command of a big breaking ball and a changeup.

Jackson Prep is loaded with arms, but they’ve got a ton of bats too — maybe none more powerful than third baseman Riley Maddox. The 6-foot-2, 210-pound corner infielder hits for power and average and has flashed elite defensive prowess on the left side of the diamond. He signed with Ole Miss in December.

The second player on our list from MRA is another pitcher who gives the Patriots a devastating 1-2 punch. Mazza is 5-foot-10 and 175 pounds who has a fastball that has reportedly topped out at 94 miles-per-hour. He bats left handed, but signed with Southern Miss because of his pitching prowess from the right side.

South Alabama got a steal when it signed Magee middle infielder prospect Brennon McNair in November. The six-foot, 170-pound senior has solid defensive skills and is more than capable with the bat. (Feature photo by Keith Warren)

Madison Central two-way sensation Braden Montgomery is arguably the most elite prospect on this list. Rated as the No. 22 player in the country for the class of 2021 by Perfect Game, the 6-foot-2, 200-pound switch hitter has wowed pro scouts and college recruiters alike with his skills at the plate, but also boasts a fastball that tops out in the low 90’s with good command. He’s signed with Stanford.

At 6-foot-5 and 205 pounds, Nichols doubles as a first baseman for the Patriots. When he’s on the mound, he looks like a giant sling shot, with a fastball that tops out in the 90’s and a very good 11-to-5 breaking ball. The right-hander is committed to Ole Miss.

The reigning 4A Mr. Football doubles as a great outfielder for Magee. He’s 5-foot-11 and 165 pounds and has undeniable speed, both in the field and on the base paths. He does some pitching, but makes his real contribution at the plate. He’s committed to play football at Southern Miss.

At six feet and 175 pounds, Powell may not wow you with his size when he walks into a room, but his bat speaks for itself. The Itawamba Community College commit was poised for a breakout season last year as a junior, when he hit .361 with six RBI’s in just 45 plate appearances before COVID-19 hit.

The seem to be breeding 6-foot-2, 220-pound, power-hitting position players in DeSoto County. Magnolia Heights’ catcher Colin Reuter, who hails from Olive Branch, certainly fits the description. He has great skills behind the plate and can hits for both average and power. He signed with Brigham Young University back in November.

Southern Miss signed ’em a good one when they picked up a letter of intent from Madison Central’s splendid middle infielder. At 5-foot-11 and 175 pounds, he’s a good defensive player and a switch hitter with the ability to keep pitchers uncomfortable. He hit .292 in 61 plate appearances for Madison Central in his last full season as sophomore in 2019.

Don’t know what they fed the boy, but he’s one of the most athletic players on our list at 5-foot-10 and 190 pounds. Sanders brings a 90-plus mile-per-hour fastball and good off-speed stuff. He bats left handed, and flashed some of the power he brings to the plate last season before play stopped.

Pascagoula will likely rely on senior first baseman Sean Smith to clear the bases this season, and that’s probably fine with him. The 6-foot-1, 205-pound right hander can absolutely rake. He committed to Mississippi Gulf Coast Community College in August of 2020.

He may be smaller than most first baseman who make pre-season watchlists like this one, but don’t let Josh Sullivan’s 6-foot, 200-pound frame fool you. He packs a serious punch from the left side of the plate and will likely be a mainstay in the middle of that Brandon lineup all season. He remains uncommitted.

West Jones’ 6-foot-3, 205-pound power-hitting third baseman committed to Pearl River last spring right after his junior season got canceled due to COVID-19. We’re excited to see what he can do as a senior.

Tygart is a big right-hander at 6-foot-3 and 200 pounds and is ranked by Perfect Game as the No. 82 overall prospect for the class of 2021. He signed with Arkansas in January.

At 5-foot-10 and 170 pounds, Watts will likely serve as Northwest Rankin’s ace this spring. His fastball is consistently in the high 80’s and he mixes two good off-speed pitches. He has not announced a college destination.