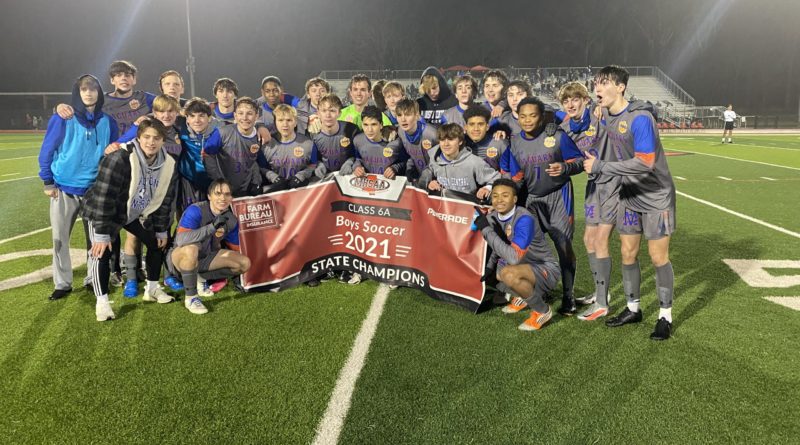 CLINTON — Madison Central coach Cecil Hinds said last weekend when the girls team went to penalty kicks against Germantown that all you can do in that situation is hold your breath and hope for the best.

He was back at it Saturday night in the MHSAA 6A Boys Soccer Championship game, and just like last week, his Jaguars found a way to win.

Madison Central defeated Brandon on penalty kicks, 5-4, after the two teams played to a 2-2 tie in 110 minutes of play to capture the 6A State Championship for the first time in five years.

“You know PKs,” Hinds said. “It can go either way, so obviously we’re happy to come away with the win.”

The Jaguars (12-4-2) won it by making all five penalty kicks. Madison Central’s junior keeper Landon Parrow made a save on Brandon’s first and second attempts, and that proved to be enough.

By the time the game went to a shootout, Parrow had endured a long second half and 30 extra minutes under an onslaught of shots on goal from Brandon (13-3-2), which overcame a 2-0 second-half deficit to force overtime.

“We watched Brandon’s film and they went to PK’s in the semifinal,” Parrow said. “I actually took down notes to see where each PK-taker went. It actually only helped me on the first and second one, but we prepared for PK’s and it paid off.”

And why not? The Jaguars had to weather a rain storm that lasted nearly the entire game and a furious Brandon rally to pick up the school’s fifth state title.

The Jags scored the only two goals in the first half. Senior Jordan Jones scored the first from right in front of the goal with 12:40 left on the clock, and the second was an absolute laser off the foot of junior John Hrivnak from 35 yards out.

Brandon quickly made up the difference in the second half on a couple of goals from Will Ballenger. The first came with 15:49 to go on a bang-bang play in the box. Ballenger took a shot that appeared to bounce out of the goal, but the official was right on top of it and ruled that the ball had crossed the goal line.

The second was a no-doubter that got past a diving Parrow with just 1:57 left on the clock.

“For the crowd’s purposes, I know it was a good game,” Parrow said. “But we really would have preferred to end the game right there at 2-0. Luckily, we still got the result we wanted.”