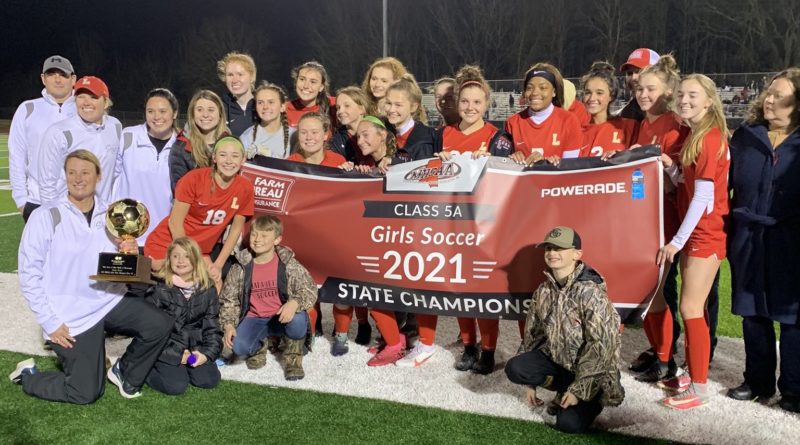 It is the Lady Commodores (17-2) third straight Class 5A state title and fourth state title in school history. Lafayette has won all four soccer state championships in the last six years.

“We wanted to be the first to the ball and first to everything and I feel like the girls took that to heart tonight,” said Lafayette coach Melinda Scruggs. “The girls really executed well in the first half offensively.”

It didn’t take long for Lafayette to get on the board as Julia Perkins scored two minutes into the game.

The Lady Dores extended their lead to 2-0 on an own goal by East Central as the Lady Hornet goalkeeper went to clear a ball and it deflected off an East Central defender and rolled into the net.

Lafayette went on to score three more goals in the final nine minutes of the first half.

Hudson Lindsay scored off a pass from Julia Perkins to extend the Lady Dores lead to 3-0. Two minutes later Caroline Perkins found the back of the net off a pass from Lillie Grace McCutchen to make it 4-0 Lafayette.

Lindsay made it 5-0 Lady Dores on a penalty kick with less than a minute to go in the first half.

“Super proud of the girls for all the hard work and it’s paying off. They’ve put their heart and soul into this game,” Scruggs said. “We lose four seniors that will be hard to replace, but we’ve been building our program to hopefully be back here next year.”

Julia Perkins added her second goal of the game one minute into the second half to make it 6-0 Lafayette.

“We were able to get five goals on them in first half. Me, Hudson and Katelin were able to just do what we do,” Julia Perkins said. “We knew it wasn’t going to be easy, so we just keep fighting for state championship and hopefully we can again next year.”