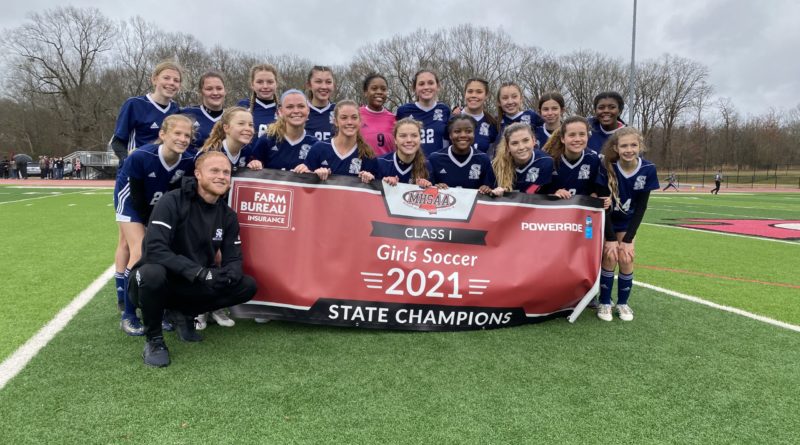 CLINTON — Soccer matches can be one-sided without appearing that way on the scoreboard.

Such was the case in St. Andrew’s 2-0 win over St. Patrick in Saturday’s MHSAA Class 1 girls soccer state championship.

The Saints (13-3-1) repeated as state champs behind goals from senior Madeleine Halford and the player of the game, sophomore Kira Leflore.

“We love to move the ball and keep it on the ground and on this slick surface it was difficult,” St. Andrew’s coach Will Monsour said. “But the girls showed why they are champions, because we had to play a different style and we still won. I’m very proud of our players for adapting.”

The win gave Monsour his second championship in his fourth year at the helm of the Saints’ program.

Leflore was everywhere. She earned an assist on Halford’s goal, which came just seven minutes into the first half. Leflore handled the ball on the near sideline, and centered it right to Halford, who booted it back to the near-side of the goal and past St. Patrick keeper Allison Ware.

The rest of the first half was fairly even and ended with St. Andrew’s clinging to the 1-0 lead.

The rain really picked up in the second half, and so did the Saints’ intensity.

St. Andrew’s had 23 shots on goal in the second half, while the Fighting Irish (19-2-0) had none. The Saints added their second goal on a corner kick that Leflore finished with a perfect touch.

“I felt like a had a lot of chances I could have finished,” Leflore said. “But I’m just happy we got the outcome we did. I was really glad to get that second (goal) late. All credit to my teammates, because I couldn’t do it again. It was just a good corner that went in.”

It was a disappointing way to end the season for St. Patrick, which had swept through the playoffs to reach Saturday’s championship game with 7-0 wins over Forest and McLaurin in the first two rounds and a 2-0 win over Clarkdale in the South State Final.

Ware, the Irish’s senior keeper, had an amazing second half. She had made 17 saves in the second half before Leflore’s goal.

The Irish seemingly had one scoring opportunity that would have tied the game with a little more than 10 minutes left, when senior Jessica Harrison appeared to receive a great touch and took off on a breakaway with no defenders between her and the goal.

But the near-side official called her for being offsides, which drew a cascade of boos from the visiting side of the stadium.